Ding Dong Tree is named Scotland’s Tree of the Year 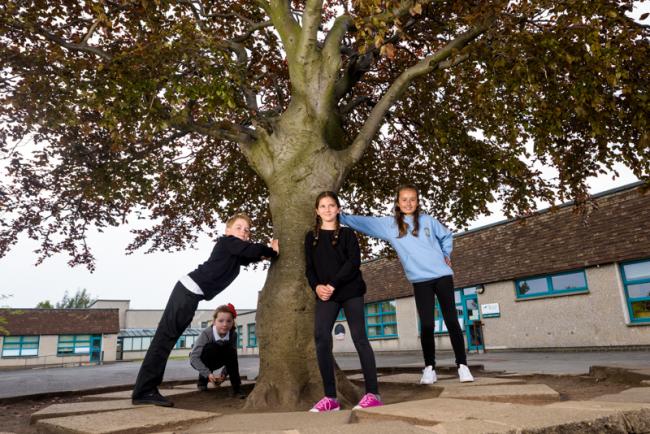 A tree which has become such an important part of school life it is seen as an extra ‘teacher’ has been named Scottish Tree of the Year.

The Ding Dong Tree, which sits in the playground of Prestonpans Primary School beat off competition to take to top accolade.

The award, which was announced at a reception at the Scottish Parliament last night, will be formally revealed on television next month.

Today, politicians who attended the reception congratulated the school and its copper beech tree, which has stood in its grounds for generations.

Iain Gray, East Lothian MSP, said: “I attended the Scottish Tree of the Year reception and was delighted when the Ding Dong tree was announced as the winner. It was up against some amazing contenders from around Scotland, so it really is a fantastic achievement. This is a wonderful accolade for the school, Prestonpans and the local community.

“Thanks are due to all of the people who took the time to vote and help the Ding Dong Tree secure this victory. The Woodland Trust also deserves great credit for bringing the contest to Scotland and giving local communities the opportunity to highlight the trees they love in their locality.”

And Prestonpans councillor Steven Brown joined in the congratulations posting a picture of pupils receiving the award at the reception on social media.

The Ding Dong Tree is so woven into the life of the school it has been described as almost like having an extra member of staff.

It gained its name from a tig game invented by pupils who compete to touch its trunk, shouting ‘Ding Dong!’

The tree’s protecting canopy makes it an ideal outdoor classroom, and it brings particular calm to children with complex emotions.

Inside the school itself, a calendar display shows pictures of the tree throughout the year alongside pupils’ achievements and most memorable moments of learning. Children hang bird feeders from the branches and it is the subject of many science and art projects.

Beloved by generations of pupils, the Ding Dong Tree has become central to the life and identity of the school, appearing on the banner of its website.

The tree will receive up to £1,000 towards pampering, thanks to players of the People’s Postcode Lottery to spruce it up and ensure its future for years to come at the school.

It will now go forward to compete for the European Tree of the Year title.