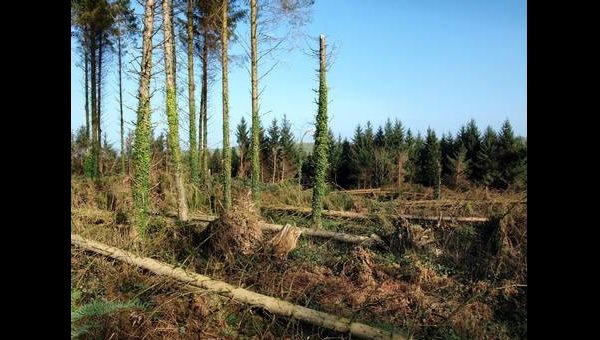 Pressures on the world’s forests are relentless and range from forest clearance, to factors as varied as disease, fire and climate change.

In Ireland we are fortunate in having the healthiest forests in Europe. This is mainly due to our island status and prevailing south westerly winds.

However, the advent of Phytophthora ramorum, to which Japanese larch is particularly susceptible, followed more recently by ash dieback disease (Chalara fraxinea), leaves no room for complacency.

We can perhaps argue that Phytophthora, as long as it remains restricted to Japanese larch, is of less consequence than Chalara. Much of the larch planted during the last 20 years or so has been included as a secondary species in diverse conifer plantations.

It has often not performed well and is of lesser economic significance.

Ash dieback is a different matter as it has very serious implications for one of our most important broadleaved trees.

It is feared that the disease may become well established in Ireland from residual stocks of imported trees as well as from wind-borne spores. The hunt is now on for a solution.

Teagasc recently announced that it has begun a four-year research project to identify individual specimens which exhibit resistance or tolerance to the disease.

It plans to use these to increase the stock of resistant trees through vegetative propagation. Seed orchards will be established with resistant parent trees. Teagasc also aims to identify tolerant individual trees from trials in infected areas abroad.

The project will expose selected specimens to ‘high disease pressure’. Grafted and micro-propagated ash trees will be planted in known infected areas.

The researchers will then be able to identify those trees that show no symptoms after exposure to Chalara spores. These will make up a bank of tolerant trees which will be used to produce disease-resistant genotypes to commercial levels.

There are numerous Asiatic species of ash and several have been shown to be resistant to the disease. Researchers believe these species probably co-evolved with the pathogen in Asia.

The project will determine the genetic diversity in the gene banks of ash designated for breeding and their relationships with the common ash. It will also identify those species that are genetically closest.

The controlled crossing of common ash with Asiatic species will form part of the project.

Teagasc is undertaking this work in conjunction with partners from Queen Mary University, London, the Science and Impact organisation INRA in Orleans, France, and the Forest Research Institute, Lithuania.