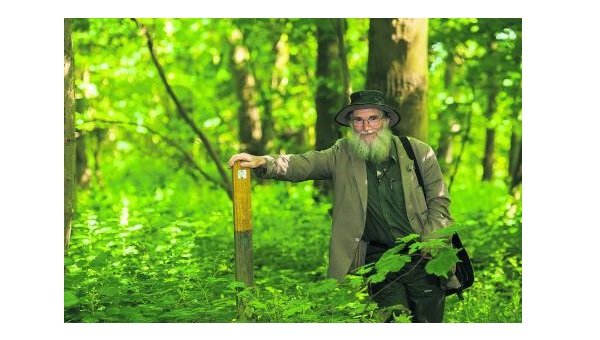 The trees he roams in Wytham Woodlands near Oxford are known the world over among ecologists.

But the ‘oracle of woodlands’, Keith Kirby, pictured, is a much more humble figure.

The scientist, woodland ecologist and researcher at Oxford Universityhas been given an award for his lifetime’s achievements, from the Chartered Institute of Ecology and Environment Management (CIEEM).

The CIEEM Medal is in recognition of Mr Kirby’s “outstanding, lifelong contribution to the advancement of ecology, forestry and woodland management”, the organisation said.

But Mr Kirby, who lives in North Oxford, said his 40 years of experience in the field would seem like no time at all to some of the trees he studies.

The 62-year-old said: “It’s a great honour to accept the award but I’m also using it as an opportunity to reflect on those who helped me to get here.”

Dr Kirby has worked “on and off” at Wytham Woods, maintained by Oxford University, since 1974 and said the site had been important in his research.

He has also worked for the government conservation service, the Nature Conservancy Council and its successors, English Nature and Natural England, since 1979.

He said: “One thing you have to remember is that although I’ve been working in woods for 40 years, that is nothing to an oak tree. While I’ve probably aged quite a lot in that time, they barely look any different at all. You can’t take a short-term view with woodland, you have to be thinking 200 years ahead.”

He also said the ecologists of today may face even tougher challenges than his generation.

Dr Kirby added: “When I first started, commercial forestry was the biggest threat to habitat destruction, but that was something that changes in national policy could affect. Issues such as climate change and the ash dieback disease are much harder to control and cannot be resolved easily.”