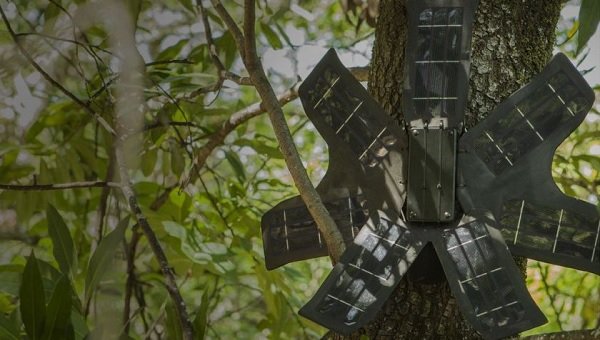 That’s not a plant.It’s a device that three friends in San Francisco think could save the world’s rainforests from illegal logging and animal poaching.

A team of entrepreneurs wants to set up a network of the gadgets — assembled from discarded smartphones — in equatorial Africa, where they would help defend a chunk of 500,000-acre forest home to endangered elephants, lowland gorillas and chimpanzees.

How it works: By capturing the sounds emitted around it, the flower-like devices tell monitors what’s going on deep inside the forest. When they pick up the distinctive sound of a chainsaw, they triangulate the location of the noise and send a text to forest managers, who arrive at the scene.

The background: The team took the anti-deforestation technology for a trial run in the Kalaweit Supayang Nature Conservation Reserve in West Sumatra, Indonesia, last summer. Within its first 24 hours, the four-device setup sensed the presence of illegal loggers and dispatched authorities. After two weeks, loggers gave up on the 300-acre area. They haven’t returned for a year.

Now, they want to expand the project to a 30-gadget network that they think will keep loggers and poachers out of the Cameroon forest.

Several leading global organizations have signed on to help with the effort, including the Zoological Society of London and KfW development bank in Germany.

Why it matters: Rain forests, which suck carbon from the atmosphere to combat global warming, provide habitat for many of the world’s most important plants and animals, and serve as a source of food, water and shelter for humans, are disappearing at an alarming rate. The Amazon, the world’s largest rain forest, has been reduced by nearly 20% in the last 50 years.

It’s time someone stood up for the resource that protects us all.