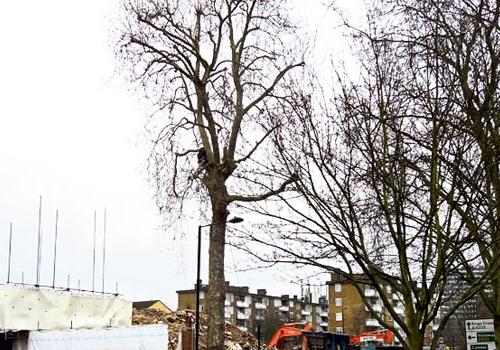 A 150-year-old London plane tree has been chopped down by builders working on a Barratt Homes development. This prompted

campaigners from civic groups to accuse the house builders of destroying healthy trees in order to make it easier to access the site.

The tree was on the corner of St Pancras Way and Camden Road, close to a new 164-home estate known as The Courtyards project. The development is on land that was until recently owned by the  Town Hall and used for parking services offices. Around 50 per cent of the development will be “affordable” housing.

After being tipped off that the tree had been destroyed and others on the site were at risk, council officers swooped unannounced on the site – and began proceedings to issue Barratt’s builders with an injunction to halt work.

However, builders downed tools last week voluntarily while inspections were carried out – and now new tree safeguard procedures are in place to protect remaining greenery on and next to the site.

Kate Gemmell of the North Camden Town Neighbourhood Forum working group said that the tree had been identified in a planning report as suffering from a  small amount of fungus but was fine to be kept in place after having branches trimmed back.

She said: “The tree report originally said the tree was fine  and should be reduced in height by three metres.

“But then, as part of a later planning report, the tree was described as having reached the ‘end of its useful life’. We would like to know on what basis the council and developers changed their minds. This was a healthy tree.

“We are pleased Camden officers have been on site and put measures in place to protect other trees, but we do not understand why anyone would cut down a healthy, 150-year-old tree that  pre-dated the buildings on the land and was likely to survive the one being built now.

“Why should the developers be allowed to cut down something that was part of an ancient avenue of trees along St Pancras Way, with no censure?”

The development attracted widespread criticism when it was first approved, as the land had once been home to light industrial businesses, and the civic group had argued that it should be used for a mix of housing and businesses. However, the Barratt scheme was passed last year and is due to be completed next year.

Designed by Camden Town-based architects Sheppard Robson, the estate will have six blocks around two courtyards, with communal roof terraces and “green” roofs on lower floors. House prices are set to range from around £500,000 to £1m. Designs include secure  lock-ups for 300 bicycles.

A council spokesman said weekly unannounced visits would now take place to check other trees were not damaged.

They added: “Barrett Homes has put in place tree protection measures in accordance with their planning permission. This followed the council’s threat of court action to stop all works on site until we were happy that all trees on site would be protected.

“We have now agreed that demolition works can restart provided that the works will not cause harm to any trees.”

A spokesman for Barratt added they had received planning permission to remove the tree and it would be replaced with a new one. They said: “Excluding this tree, there are seven trees in total within the site vicinity – five lime trees and two London plane trees.

“None of these trees will be removed and the Arboricultural Report sets out the tree and root protection measures that the contractor will carry out.”