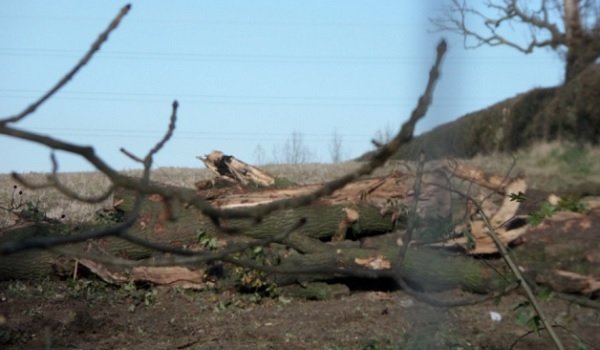 A developer which wants to build 550 homes at Manthorpe says it has cut down a number of trees on the site for safety reasons.

Workmen have been cutting down mature trees this week in the field at the end of Longcliffe Road. Developer Larkfleet Homes wants to build 550 homes on the site.

St Wulfram’s ward district councillor Ray Wootten says he has been contacted by a number of residents this week concerned about the trees.

Coun Wootten said: “It’s a sneaky thing to do. They are rather presumptuous that they are going to get planning permission. I thank residents for being vigilant and contacting me. I will let them know as soon as an application is in.”

In response the develop said: “Larkfleet, as part of its agreed pre-application procedures, has been looking at the site and a number of its workmen expressed concerns about the state of the trees. Larkfleet also received correspondence from residents who were concerned about the trees on the boundary and the safety aspects associated with them, as a number of people, including children, walk their dogs in that area. Larkfleet has taken all reasonable measures in respect of these trees which were professionally assessed by relevant consultants a short while ago. Furthermore, in light of recent high winds Larkfleet asked a tree surgeon to take a look at the trees in the interests of health and safety.

“He advised that the trees were in a bad state of repair and as there were no tree preservation orders on the trees it was felt the best course of action was to remove those that posed the greatest health and safety risk to residents and workers. Larkfleet will continue to monitor the other trees on the site in line with health and safety concerns over the next couple of months.”

Val Rose, who lives on Wensleydale Close, said she saw a JCB digger being used by workers who were cutting the trees down on Tuesday morning. She said: “They just charge in and do what they want. I think what they are doing is bulldozing their way in on the Longcliffe Road area. We are furious with it.”

Larkfleet Homes says it is looking to bring forward an outline planning application for 550 homes, off Longcliffe Road, which would include a range of different house types and affordable housing.

The plans also include a neighbourhood centre, a convenience store and three small shop units, a single form entry primary school with joint-use hall and playing fields, play areas, allotments and connections to existing footpaths and the cycle network.

Four years ago the company applied to build 1,000 homes on the site which was refused. Those plans included a hotel and a pub.