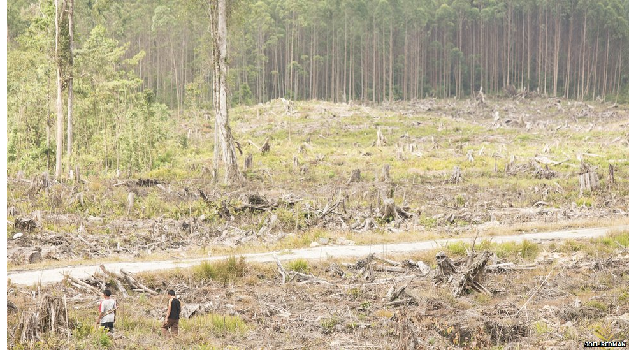 Around five football fields of tropical forests have been illegally cleared every minute between 2000 and 2012 according to a new report.

The authors say that consumer demand in Europe and the US for beef, leather and timber is driving these losses.

The vast majority of this illegal deforestation for commercial agriculture took place in Brazil and Indonesia.

The authors say the practice is spreading rapidly in Asia and Africa.

The research has been carried out by Forest Trends, a US based, non-governmental organisation that includes environmentalists, industry and the financial sector.

Their report focuses on the question of illegality. While the cutting down of tropical forests has been an issue of global concern for several decades, knowing what’s legal and illegal has been much more difficult to ascertain.

This new study argues that in the first 12 years of this century, 49% of tropical deforestation was due to illegal conversion for commercial agriculture.

The authors say consumer demand in the EU and elsewhere for agricultural commodities is the main driver for these clearances that have seen more than 200,000 sq km of forest laid bare.

The report values this trade in commodities including timber, leather, beef, soy and palm oil at $61bn a year.

“I think it will come as a shock to a lot of people, even to people who work on deforestation,” lead author Sam Lawson told BBC News.

“People are often blind to the illegalities or don’t see them for what they are in terms of the scale.”

Much of these forest clearances are illegal, but governments don’t have the capacity to enforce their own law. Licences and permits to cut the trees are often acquired through corruption.

This can have significant, sometimes deadly implications for the indigenous communities that live in these forests.

In recent days in Peru, four indigenous campaigners were murdered for their opposition to illegal land clearances.

In Brazil, where large amounts of this type of deforestation have taken place, the authorities are making strenuous efforts to tackle the problem.

One reason they have had success is they have started to hit the corporations involved, in their pockets – blocking access to credit for example, for companies involved in illegal clearing.

The authors believe that consumer countries like the European Union could be doing much more to tackle the problem.

“At the moment EU is giving large amounts of money to these tropical countries to reduce deforestation while at the same time it is shooting itself in the foot by importing all these dodgy products from illegal clearances,” said Sam Lawson.

“It needs to close that vicious circle, it needs to stop importing these products as a first step.”

The research team believe that the example of tropical timber could be a role model for tackling beef, leather and palm oil from illegal sources.

Back in the 1980s, there were attempts to ban these imports but these floundered. There were also certification schemes that met a similar fate.

Ultimately, according to the researchers, countries realised that the only thing that would work were strong regulations and not voluntary actions.

“In the EU we now have laws saying that companies have to do due diligence on their timber to make sure it was legally produced,” said Sam Lawson.

“What is needed is equivalent legislation regarding these commodities including palm oil, soy and beef.”

The biggest concern right now for campaigners is the spread of illegal deforestation to new countries in Latin America, Africa and Asia.

They point to Papua New Guinea where millions of hectares of forest have been licensed for deforestation in recent years. A parliamentary inquiry found that 90% of these licences were issued by corrupt or fraudulent means.

All these land clearances are making a significant contribution to global warming.

The report estimates that in the period 2000-2012, carbon dioxide equivalent to a quarter of the EU’s annual total was emitted every year.

Developed countries have embarked on an ambitious programme to pay developing nations to stop cutting down the trees. But Sam Lawson thinks this is doomed to failure.

“It is pointless paying a government to change its policies when these governments are incapable of implementing and enforcing their policies in the first place.”