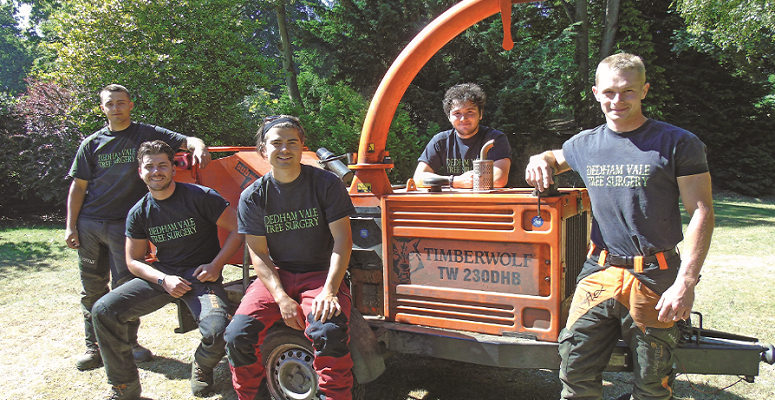 Harry Adams, company founder of Dedham Vale Tree Surgery, comments: “We’ve tried other brands of commercial wood chipper before, but their performance was nowhere near as good as Timberwolf.”

Dedham Vale Tree Surgery have owned Timberwolf products for the last three years, initially choosing a pre-owned TW 150DHB,from Authorised Timberwolf Dealer Ben Burgess. Investing in their first commercial wood chipper was a big decision for a fledgling business, but Dedham Vale Tree Surgery recognised the high levels of service and support provided by the Timberwolf Authorised Dealer network and felt confident they were buying a high quality pre-owned machine that had met a series of stringent checks.

In 2016, Harry added a TW 230DHB to his fleet and it has become a firm favourite due to its sub-750kg towing weight, compact size and manoeuvrability, which makes it perfect for their work on domestic properties. The feed opening means up to three members of the ground team can feed the machine at the same time and the quad force rollers, no stress system and 35HP Kubota engine ensures the chipper keeps up with the demands of any job. Harry summarised the wood chipper’s powerful performance by describing it as: “A mean machine!”

Book a demo with an local Authorised Timberwolf dealer at www.timberwolf-uk.com