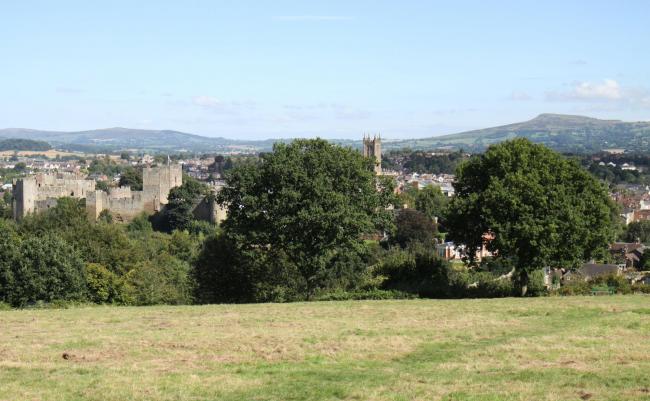 The fate of two ‘magnificent’ young oak trees at a Ludlow beauty spot will be decided in the coming days.

A faction of the Friends of Whitcliffe Common want the trees chopped down because they consider that they spoil the view of the town.

But this has caused an outrage with one Ludlow Town Councillor describing the plan to take the axe to the trees as ‘an act of environmental vandalism’.

Town Councillor Tim Gill says that if the axe falls he will consider his membership of the ‘Friends’ and expects others to do the same.

“The application to cut down two oak trees that has now been approved by Shropshire Council, is environmental vandalism,” said Ludlow Town Councillor Tim Gill.

He believes that the claim that the trees spoil the view of the town does not stand up and that people only have to walk a few yards either way to look down on Ludlow and the Shropshire hills in the distance.

“For anyone who stands at the top of Whitcliffe, the idea that these trees obliterate an iconic view is absurd,” Tim Gill added.

“Oak trees, that support a greater number of insect species than any other tree, are potentially under threat from acute oak decline so the cutting-down of two young healthy oaks is wrong-headed in the extreme.

“The town council, following the advice of their tree expert, made their opposition to the removal of the oaks clear.”

Andy Boddington, who represents Ludlow on Shropshire Council, has also condemned the proposal to chop down the trees.

Experts on trees from Shropshire Council have described the trees as ‘magnificent’ and say that in other circumstances they would be worthy of preservation.

However, they have decided not to intervene in the matter.

But the final decision will be made by the Shropshire Wildlife Trust when their committee meets in Shrewsbury on Tuesday (November 1).

The trust which says that it is committed to conservation will be aware of the strong opinions that the future of the oak trees has generated.

Gareth Jones, a member of the Wildlife Trust living in Ludlow, has no doubt where the court of public opinion sits.

“I know of no-one in Ludlow who is a member of the Wildlife Trust who wants to see these trees cut down,” he said.

Shropshire Wildlife Trust has been in contact with the various interested parties to try to find a solution.

The Shropshire Wildlife Trust took Whitcliffe Common on a 99-year lease from the Plymouth Estate in 2009. It is one of 40 nature reserves that it owns or manages throughout Shropshire while The Friends of Whitcliffe Common is a voluntary group that carries out much of the management of the common.

Options could involve making sure that the two trees are pruned regularly or having one of them cut down but the trust will be aware that this would be unlikely to satisfy anyone.

Daphne Jones, chairman of the Friends of Whitcliffe Common, has defended the plan to take the axe to the trees.

She has claimed that the removal of the trees is in-line with a plan to open up historic views of the town and that the majority of comments received by Shropshire Council support the cutting down of the trees.