Dead trees chopped down opposite Brangwyn Hall after storms 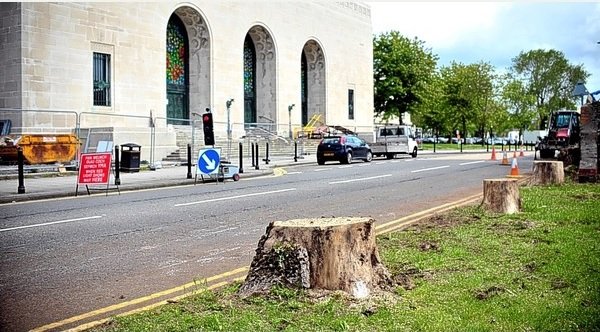 Up to 20 large trees next to the Brangwyn Hall have had to be felled following safety concerns.

The black poplar trees opposite the main entrance to the hall died, after being damaged during the heavy storms which hit much of the country in the spring.

But Swansea Council says it plans to plant other trees nearby.

A spokesman said: “The trees are now being taken down by our parks staff, and the works are expected to be finished towards the middle of next week

“Replanting of other trees will happen on a grass verge towards the Victoria Park end of the road.”

The trees are not the only ones in the city to have been damaged by the weather.

Last month, a couple and their two young daughters narrowly avoided serious injury, when a tree fell onto their car in Brynmill Lane.

The tree next to Singleton Park was blown down, demolishing a boundary wall and falling across the road as the family drove by. The family walked away unscathed, but their Mazda was seriously damaged.

Tree experts blamed the collapse on a period of extremely hot weather followed by rain.