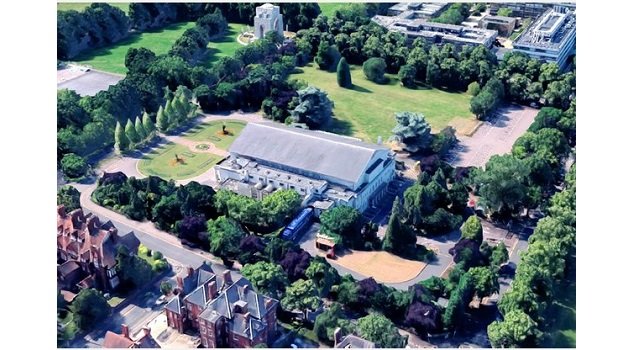 Around 50 trees are to be cut down in the gardens of Leicester’s De Montfort Hall.

Leicester City Council officials are to carry out the work because they say the 7.5 acre grounds of the venue have become overgrown over the years.

The council has admitted the £50,000 operation which starts on Monday could be ’emotive’.

However, it insists the work will help restore the gardens – originally laid out in 1913 – to their former glory.

A council spokesman said: “Over the course of a century some of the extra shrubbery and trees have become overgrown and overcrowded, affecting the health of neighbouring trees and obscuring the very views of the Grade II listed hall which they were meant to enhance.

“Some trees or shrubs which have been planted more recently or have grown from fallen seeds are also overcrowding or damaging neighbouring trees.”

Half of the 50 trees, mainly purple plums, to be felled are small trees or saplings which have grown from fallen seeds.

The council says the others are a mixture of trees with significant defects and damage, or ones which have reached the end of their natural lives and need to be removed before they become hazardous to visitors.

A further 20 trees will undergo some pruning, crown-lifting or other works to help keep them healthy and prevent future problems.

De Montfort Hall general manager Antony Flint said: “It is a shame that we’ve got to consider removing some trees from De Montfort Hall’s gardens, but it necessary to ensure that the other trees can continue to grow healthily and in the way the gardens were originally planned.

“We’ve consulted with tree experts, ecologists, landscape planners and English Heritage on this, and they agree that the planted areas of the gardens are now quite overcrowded.

“The resulting lack of light and space is having a detrimental effect on the health and integrity of some of the significant trees in the gardens.”

The council says a number of notable trees will benefit from the removal work, by being given more room and light to grow, including two cedar trees believed to be between 200 and 300 years old, and a giant redwood thought to be approximately 150 years old.

Assistant city mayor for culture, leisure and sport councillor Piara Singh Clair, added: “We do appreciate that works like this can be quite an emotive subject and we have taken all the relevant advice we can on this.

“Ultimately, part of our responsibility in looking after cultural heritage assets like De Montfort Hall sometimes involves this type of work.

“The end result will be a better environment for the trees and plants in the gardens, which will be closer to their original 1913 appearance and design, and also ensuring the gardens can continue to be enjoyed fully by visitors.”

The council says the work will not affect events at De Montfort Hall, including the Simon Says music festival, which takes place on July 29 and 30.