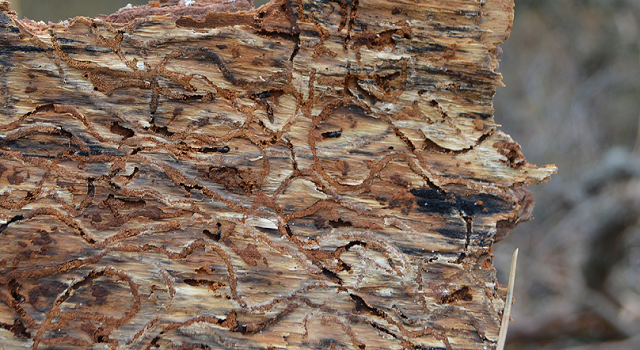 Research published in Forest Ecology and Management shows that the composition of forests is more important than other factors when predicting the path of the southern pine beetle, with pitch pine forests being more susceptible to the pests that forests with a mix of tree species.

Carissa Aoki, a post-doctoral research associate at Dartmouth and lead author of the study commented: “Knowing which tree stands may be most susceptible to this beetle is extremely important information for managers working to protect our forests.

“This research not only tells us that preventative treatment such as thinning can be effective, but also helps prioritize tree stands for treatment based on structural characteristics.”

“The northward movement of the southern pine beetle is just one example of how climate warming is permitting rapid range expansions,” said Matthew Ayres, a professor of biological sciences at Dartmouth. “We can expect many more cases because the warming continues. This might mean you can grow a cherry tree where you couldn’t before, but you and your plants can also expect a growing battery of pests that weren’t there before.”

Researchers focused on the New Jersey Pinelands, in the southern and central portions of the state where the coldest nights get down to around 7 degrees Fahrenheit, creating a favourable condition to the southern pine beetles.

The researched shows that infestations in both wetland and upland areas were far more likely to occur in pure conifer stands, rather than stands made up of a mix of oak and pine trees, with wetland areas being especially affected and wetland mixed sites showing fewer spots than they anticipated.

Aoki continued: “The percentage of pine in a forest really matters. Our study shows that in forests with a range of pine and oak mixes, pine-dominated stands were at highest risk of infestation. From a management perspective, these stands can be prioritized for preventative treatment such as thinning.”

Stands of intermediate ages were disproportionately infested, with forests comprised of older, larger trees tending to be very susceptible and younger trees known to not be susceptible and not sampled. The susceptibility of stands was also found to be linked to the volume of trees in a stand and the percentage of green on the tree.

Monitoring to detect population increases, rapid suppression of spots when they are still rare, and the thinning of trees have all been used to prevent the spread of the pests.

“It is good to know that the preventative techniques that have been used in the South will probably also be effective in the Northeast,” said Aoki. “The research should also be heartening to managers who worry that thinning leaves old, large trees in place and thus may place these valuable trees at risk. Actually, such stands are demonstrably less susceptible than unmanaged stands.”

Southern pine beetle activity occurs in extremes — either very rare or through infestations that involve millions of pests. During episodic outbreaks, the beetles readily kill even the healthiest pines through synchronized attacks that overwhelm tree defenses.

Within an outbreak area, such as now occurring in New Jersey, New York, and Mississippi, there can be as many as thousands of local epidemics — identified as “spots” from airplanes — within which hundreds of trees can die in a year.

“The southern pine beetle is one of the most aggressive tree-killing insects in the world. Outbreaks tend to be self-sustaining because the more beetles there are, the better they succeed,” said Ayres, a co-author of the report with 25 years of experience studying the beetle species.

The last documented outbreak of southern pine beetle in New Jersey occurred over 80 years ago, but the mid-Atlantic states may see more regular outbreaks in the future. The northern New Jersey Pinelands, and pitch pine stands in the New England states with similar structural characteristics, are particularly at risk of infestation as the southern pine beetle continues to move northward.

As of 2014, a new outbreak was detected on New York’s Long Island as well as scattered throughout Connecticut the following year. Beetles have additionally been trapped as far north as Rhode Island and Massachusetts, though large-scale tree mortality has not yet occurred in these latter states.