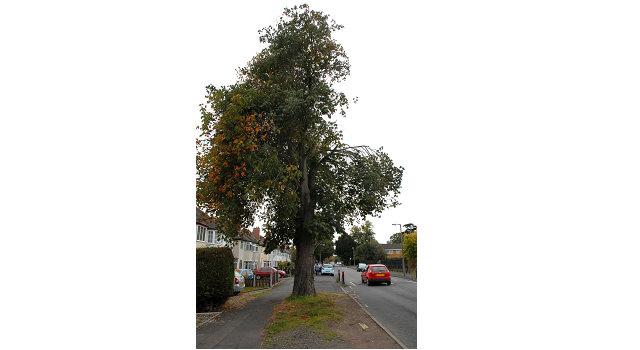 A “dangerous” over-hanging branch is a “tragic accident” waiting to happen, according to a Kidderminster woman.

Jenniffer Whittall, of Marlpool Gardens, fears the loose branch on a horse-chestnut tree in Marlpool Lane could fall and injure a pedestrian or motorist – and despite reporting the matter to Worcestershire County Council claims no action has been taken.

She is now questioning the logic of the local authority’s approach to tree maintenance having read in The Shuttle about unwanted pollarding of lime trees in Imperial Avenue while this unstable branch has been left untouched.

Worcestershire County Council has however said that following a survey, a number of issues with the tree have been identified which compromise its long term health and will be cut down.

Mrs Whittall said: “The branch really does look like it is in a dangerous condition – it is hanging at a very strange angle and there is a mark indicating some sort of damage to or split in the wood.

“It could be rotten or dead and whenever I am driving passed I feel anxious.

“One of these days we are going to have strong winds and it could come down.

“A child out walking, someone riding a push bike or even me in my soft-top car might be underneath and then there would be a tragic accident.

“Something needs to be done about it soon. I called the county council in June and chased it up again but nothing has happened.

The 67-year-old added that she loves trees and was saddened to see the lime trees on Imperial Avenue looking “ugly” with “all their balance lost” after pollarding work.

A spokeswoman from Worcestershire County Council said: “In order to maintain the safety of road users and residents we have arranged for the tree to be felled and the stump removed.”