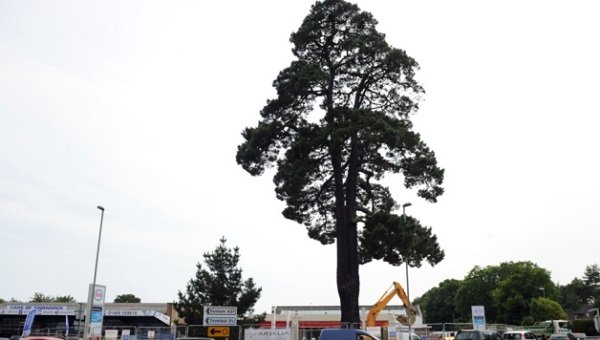 A much-loved tree described as a ‘significant landmark’ will be felled after it caught cauliflower fungus which caused it to rot.

The decision to cut down the Montgomery pine, in Bridge Street, Park Gate, was made at Fareham Borough Council’s latest planning meeting.

As the tree was protected by a preservation order, planning permission was sought to fell it after council officers deemed it to be ‘an unacceptable risk to the public.’

Council leader Sean Woodward said he was saddened to see the tree go, especially after it was saved 15 years ago when it faced the axe over safety concerns.

Cllr Woodward said: ‘It is a major landmark in Park Gate.

‘There was a lot of investigation work done on the tree, but now the investigation shows it has become dangerous which is terrible because it is well loved and a huge landmark.

‘Its removal is going to significantly change the street scene in Park Gate.’

Councillors gave the green light for the tree to be cut down after tests found that it had contracted sparassis crispa, known as cauliflower fungus.

It caused it to rot resulting in virtually no strength, meaning that branches could break off.

A council report said: ‘Brown rot wood decay can result in a sudden catastrophic failure without any visible adaptive growth features being exhibited by the tree.’

Further tests were carried out earlier this month which showed ‘extensive internal decay at the base of the stem, which is more severe than initially thought’.

Two residents wrote to the council objecting to the works until further investigation was carried out.

Other residents wrote to the council noting that the tree is a significant landmark that should be retained and calling for a replacement to be planted.

Councillor Katrina Trott, who was on the planning committee, said: ‘Because it is dangerous we agreed that it had to go.

‘We said that it can go but that another must be planted and it must be at least three metres tall.

‘It is a landmark and residents told us they would not want to get rid of it unless we really had to.’