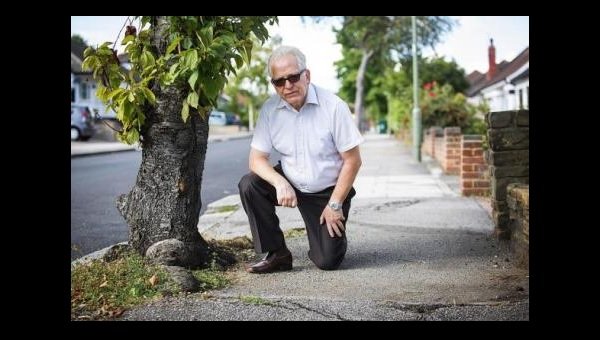 The damage caused by tree roots has left a street “dangerous to walk down”.

Daphne and Harold Schogger, who live in Highview Gardens, Edgware, are worried about the extent of the damage caused by tree roots in their street. They claim their driveway was left in need of repair, and the pavements are uneven in places.

They first noticed the problem a few years ago. Harold, 63, said: “The council should remove the trees, or plant smaller ones. The problem isn’t just here, it’s everywhere.

“The worry is that they will spread under our house. I don’t want it to happen again.”

They put in a claim to Barnet Borough Council for the cost of the repair work to their driveway. The council has agreed to pay two-thirds of the cost, which is roughly £1,600.

Daphne, 63, a compliance consultant in the City, said: “We don’t know until they start digging how bad it is. I made it clear that it could be worse. I hope it’s not but you don’t know.”

She added: “I think the council needs to take ownership of the problem and deal with it. I don’t want this to happen again in ten years time. We try to keep our house in order and this is the one thing that is blotting it.

“What concerns me as a taxpayer is that they are putting lots of trees and things into the town centre, and the same thing is going to happen. It’s a waste of money as far as I can see. The repercussions will be awful.”

The couple have lived in the street for 19 years.

Harold, who teaches bridge during the week, said: “I just want an assurance they are going to start looking after the trees. It’s dangerous to walk down the road.”

Liorrah Balilah, a neighbour who lives down the road, agreed that the tree roots were causing problems. He said: “It’s dangerous for the kids. My nephew tripped over and broke his tooth. They should be taken down, 100 percent.”

A spokesman for Barnet Council said: “We are one of the greenest boroughs in London with a large network of trees and we are proud of this. All street trees in Barnet are surveyed and necessary works are carried out after an extensive inspection.

“In addition, we inspect every street twice a year to identify pavement and road problems, as well as responding to customer-reported issues. We are not aware of any major issues with our trees in this particular area.”