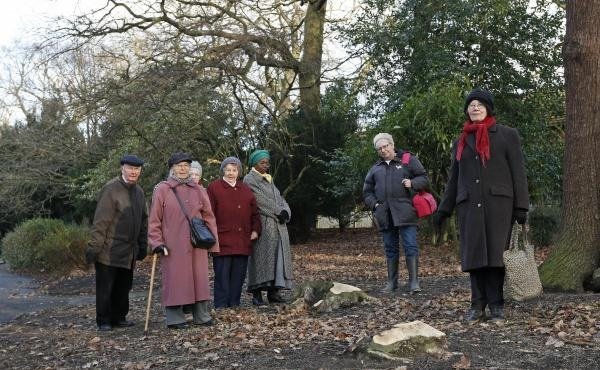 The 28-acre park is one of the last remnants of the Great North Wood, which spanned South London and lent the areas of South, Upper and West Norwood their names.

Josephine Ambrose, who lives in nearby Ross Road, first noticed trees being torn down while walking her dogs on January 8.

She said: “I noticed from a distance what seemed to be a large army manoeuvre while a section of the park was cordoned off.

“I thought this was strange and wondered if they had got the right Grangewood Park as there was nothing wrong with the trees and being the middle of winter with the wildlife having a difficult enough time as it is.

To go in and start destroying their habitat seemed rather senseless and muddleheaded to me.”

The next morning Mrs Ambrose, who has lived in the area for 15 years, returned to the park and counted 12 trees gone.

“The park is getting bald. It is beginning to resemble a dust bowl. The council is cutting more than 500 jobs but it when it comes to destroying this park it seems to have a bottomless pit of money.”

A group of locals have now come together to demand answers from the council. They are also fearful for an albino squirrel that lives in the park, which they feed regularly and have dubbed Walter Walnut.

Pamela Parker, 81, of Wrights Road, said: “It is a park I have been going in for 30 years and still go in there more or less every day. It is a shame. It has made the park look bare and it is also damaging habitats.”

A council spokesman said: “As part of our normal maintenance to Grangewood Park, we asked our contract gardener to clear some shrubs and 12 conifer, hazel and holly trees that were making part of the park look overgrown and were blocking the light from sun-loving plants like Forsythia underneath.

“We did this to make the park more attractive, and over the next couple of years we will develop a programme of replanting shrubs and developing the flower beds.

“The park has hundreds of healthy specimen trees and there is no intention of carrying out any works to these.”