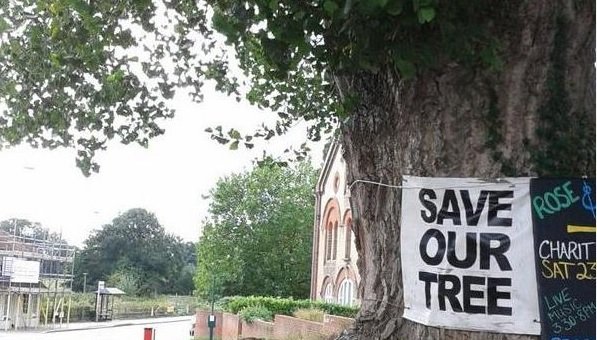 Residents in Hadlow have reacted in anger after it emerged Kent Highways plan to tear down a historic tree on the High Street.

The majestic White Poplar has stood on the corner of A26 and Carpenters Lane since the junction was formed in 1986 and was previously contained within the walls of the Hadlow Brewery.

But Kent Highways are concerned the tree is a hazard and five accidents in the last five years have persuaded them to press forward with plans to remove it from the roadside.

However, a group of residents have written to Kent County Council expressing their dismay at the proposed removal of the tree and blame drivers for the recent accidents.

“The tree is very important feature of the High Street and tearing it down should be a last resort not a first option,” Cee Wetton, 69, of Castle View, told the Courier.

“It’s not the tree that is at fault but the speed of the traffic entering, and driving through, the village.

“The police themselves have stated that they’re ‘surprised’ at the speed of traffic passing through the village so why should we lose a tree because some drivers are incompetent and irresponsible?

In the letter to the KCC, campaigners suggested a number of alternative measures to improve safety including a 20mph speed limit, the instillation of a speed camera and a sign warning driver to slow down.

Kent Highways first made Hadlow Parish Council aware of complaints regarding the tree impairing the visibility of motorists in April 2013.