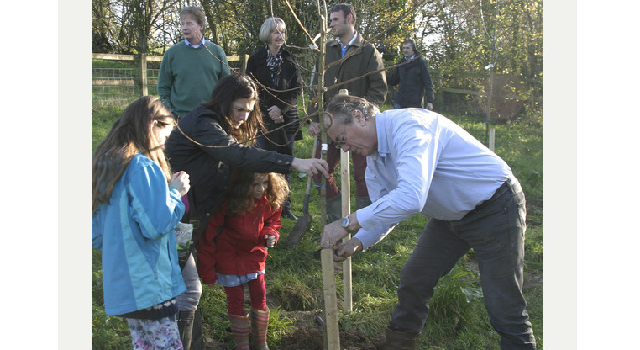 This Christmas, The Royal British Legion is calling on the British public to keep the memory of those who made the ultimate sacrifice in the First World War alive for future generations. Working in partnership with Ashridge Nurseries in Somerset on a project called Centenary Gardens, the Legion is encouraging the public to plant a living legacy for those who fought and died in the First World War as part of its Centenary commemorations.

Frances and Julian de Bosdari, owners of Ashridge Nurseries in Castle Cary gathered a supportive crowd including Countess Mountbatten of Burma to help them plant a Centenary Garden in Somerset. They chose to plant a selection of trees from the Westonbirt Collection which have been chosen especially for Centenary Gardens by the director of the National Arboretum at Westonbirt.

The Centenary Gardens project allows people to go online and choose from a selection of over 100 trees, shrubs or roses and plant them in their garden or somewhere special to them, their family or community to create a living memory. A minimum of 50% of profits will go directly to the Legion, which is the National Custodian of Remembrance, to support its work as the nation’s leading armed forces charity providing care and support to all members of the British Armed Forces past and present, and their families.

Gardeners of all varieties, no matter what space they may have available, will be able to place orders, handled through Ashridge, atwww.centenarygardens.co.uk over the next four years throughout the commemorations of WWI.

Dr. Stephen Clarke, Head of Remembrance at the Legion says: “The idea of planting a living legacy in commemoration of those who died in the First World War brings to life the notion of passing on the torch of Remembrance to the next generation. Living tributes of this nature can last for decades if not hundreds of years, standing as a lasting reminder of sacrifices that have been made on our behalf.”