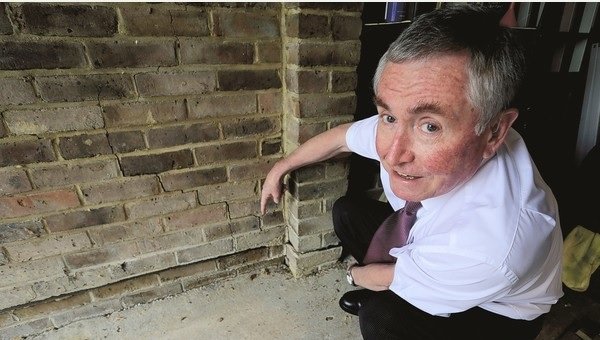 TENS of thousands of pounds of taxpayers’ money could be spent on stopping an “ugly” oak tree from being chopped down.

Its roots are growing beneath a garage in Windmill Court, West Green, causing serious damage.

But Crawley Borough Council has been accused of “sheer bloody mindedness” over its refusal to allow the oak, protected by a tree preservation order, to be felled.

Instead, insurer Aviva plans to carry out extensive work to repair and reinforce the garage, on behalf of owner John Weaver, and reclaim the majority of its costs from the council.

Although cutting down the tree, which is on a neighbour’s property, would potentially save the council a fortune, it seems intent on preserving what it insists is a “community asset”.

“It comes down to one simple question. Would you rather spend £20,000 protecting this tree and force the owner to spend £500 every couple of years cutting it back, or cut down this tree, which is malformed and which nobody will miss? There are lots of things the council does right, but on this issue they have got it wrong.”

Mr Weaver got in touch with the Crawley News after reading our story last week about a crumbling wall in Southgate Drive, Southgate, which West Sussex County Council will not repair because it lacks the money.

He added: “The garage is going to have to be underpinned and the insurance company will then take action to recover the costs from the council. That money could instead be used to rebuild the wall in Southgate, and fill in some dangerous potholes around Crawley as well.”

Mr Weaver has endured an eight-year battle with the borough council to try to get the tree felled.

Several of those years were also spent fighting to get another oak tree removed, which was causing damage to his house.

It was only when the council was faced with a potential repair bill of £280,000, again from an insurance firm, that it relented and allowed the protected tree to be felled.

Mr Weaver had planned to retire in 2006 but because of the damage the trees have done to his home and the ongoing threat to the garage, he has been unable to sell up and move house.

Mr Weaver accused the council of being stubborn.

He said: “This has been going on for eight years. It’s sheer bloody mindedness.

“They are adamant that this tree has to stay, saying it is a community asset.

“But my neighbour, whose property the tree is on, wants it gone, I want it gone, and I can’t see that anyone is going to miss it.”