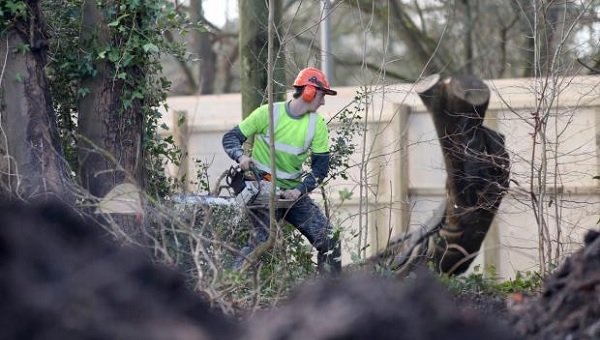 Trees damaged at Christchurch’s Druitt Gardens will not be relocated, despite recommendations from planning officers.

But members, despite giving the green light to two other measures, said no.

The retirement complex sparked controversy when a number of protected trees were damaged on the site just days after protection orders were placed on them in 2014.

The trees were damaged during an archaeological dig on the site and felled by council tree surgeons after an inspection from the council’s tree officer.

Residents protested over the damage, with Christchurch council’s scrutiny committee later reporting a ‘misunderstanding’ between the developer and council had led to the tree felling.

Damage to one of the silver birch trees near the flats was caused by an ‘unknown person’, says the planning report.

“One of a group of silver birch planted near the flats has been topped by persons unknown, probably to increase light in, or views from one of the flats”, it added.

Planning committee chairman, David Jones said the trees were put in place to screen the building from the gardens.

“They were not intended to enhance the views from the flats”, he added.

Prior to the meeting, Peter Tanner, planning director at Renaissance Retirement, refuted the suggestion the damage was carried out to increase light in or views from the flats, saying it was “pure speculation on the part of the officer.”

Now, following the decision, Renaissance Retirement’s managing director, Robert Taylor said: “It is disappointing that there are a few people out there whose negative attitudes are blinding them from seeing the benefits that this development has at last brought to this part of the town.”

He said the development had put vitality into the town centre and transformed a “derelict eyesore”.

The other items approved include the replacement planting of two oak trees and the repositioning of another to allow better access for vehicles.