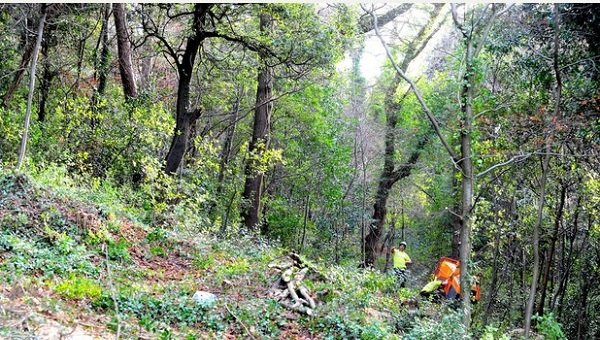 Torbay Council says it has secured Forestry Commission permission for an extensive, three-year plan to re-start active management within all its woodlands in the Bay.

The initial work at Chapel Woods will clear evergreen Holm Oaks around and below the chapel to regain historic views of the chapel from Torre Railway Station and beyond.

The council says these trees have ‘severely restricted the growth of native trees, narrowing wildlife benefits greatly in this part of the wood’.

The timber will be sold and used as support funding for the improvements works. The council says clearing the evergreen oaks will help encourage lower plant diversity .

Footpaths will be improved and benches refurbished as part of the plan.

It comes after consultations with community groups, ward councillors, Natural England and English Heritage met with ‘positive responses and encouragement’ to start the improvement works.

Chapel Woods in Torquay has been selected as the first woodland to start works as part of the approved Woodland Management plan.

The first phase is expected to last three to four weeks, subject to weather.

Cllr Robert Excell, executive lead for safer communities, highways, environment and sport, said: “A lot of hard work has gone into obtaining consent to actively manage Torbay’s woodlands. We have received positive responses about the improvement works and are looking forward to the start of the first phase.”

The extent of the work means it will be phased over three years.

Further grant funding has been applied for from English Heritage for restoration works on St Michael’s Chapel and a positive decision is expected shortly.

An interpretation board is planned to explain the significance of the site’s geological features and built heritage and its importance as part of Torbay’s Global Geopark status.

Torbay Council said it was not possible to say how many trees were being felled.

A spokesman said: “At the request of the ward councillors and community groups, we have now also engaged a professional photographer to produce before, during and after pictures with work progress updates to be pushed out via our social media pages.