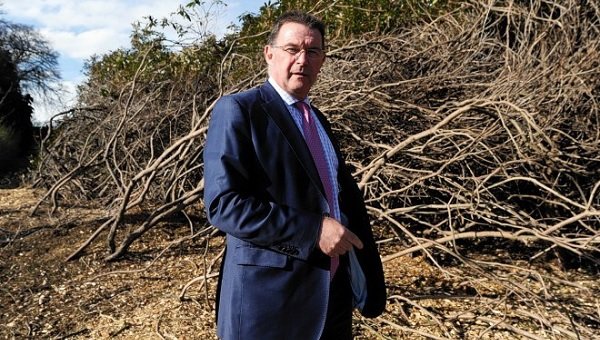 Residents in a smart city suburb have been left baffled after council workers turned up and started chopping down their trees.

They say a stretch of what was attractive greenery has been left “devastated” and have demanded an explanation from the local authority.

About 30 trees were felled on amenity land which is co-owned by a number of residents in Cults Gardens.

An Aberdeen City Council spokeswoman said the local authority was unable to go into detail about the incident.

But she said the trees had been removed on safety grounds and discussions with residents were “ongoing”.

Lawyer David Rennie, who moved into Cults Gardens last year, and said the local authority workers had left behind an “utter mess”.

Ironically, the situation in Cults emerged just days after it was revealed a multimillion-pound scheme to create a landmark museum at Aberdeen’s Rubislaw Quarry could be derailed – over plans to remove just a dozen trees.

Mr Rennie, 61, said yesterday: “A group of around half a dozen turned up unannounced and began chopping down the trees.

“When I asked what they were doing one of them told me they were from the council and had been sent to cut down the trees as they were affecting communication reception.

“I have been in touch with the council – but no one seems to be coming back to me.”

Property owners in Cults Gardens whose homes overlook the stand of trees have an equal share in the ground.

But Mr Rennie said the council workers appeared to be under the impression that the local authority owned the land.

He added: “The council seems to think it has an entitlement to go on to the land and cut down a large proportion of mature trees where it has left a scene of utter devastation.

“All we can see apart from a bunch of tree stubs is just a mess alongside a 50-yard bank of bare bushes with no greenery. I can’t do justice to describing it.”

A council spokeswoman said: “We can confirm trees in the area judged to be unsafe were felled, and discussions with the householder are ongoing.”