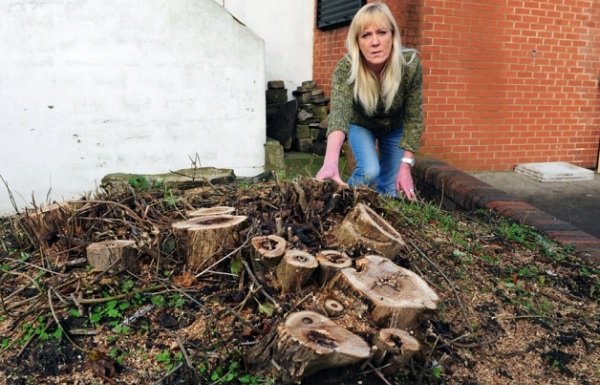 A row has erupted after Leeds City Council workers felled a tree in a community memorial garden outside a charity cafe in Leeds.

Angry volunteers at the The Real Junk Food cafe on Chapel Lane, Armley, said the tree was a focal point in the edible garden.

The garden was established in memory of former volunteer Keith Waddell, 50, of Harehills, who died in a climbing accident in Wales in August.

The Real Junk Food Project volunteers say the tree, on land behind the cafe, was healthy.

Teresa Milligan, co-director of the The Real Junk Food Project cafe, which serves customers food that would otherwise be thrown away, said: “I think it is disgusting.

“We should have been notified to say the tree was going to be taken down. It has caused upset.”

Fellow co-director Adam Smith said: “The tree’s root network wasn’t expose. The tree was still healthy when they chopped it down. It’s a load of nonsense. People have put a lot of time and effort in to create this garden. Keith volunteered at the cafe for two weeks when we first started. If it wasn’t for him, the cafe might not have been here. We did this because of what Keith gave to us.”

Coun Mark Dobson, Leeds City Council’s executive member for the environment, said: “Whilst I sympathise with their good intentions in terms of wanting a memorial garden, unfortunately when they exposed the roots of the tree in the summer, they left it in a situation where it presented a danger to the public and it had to be removed.

“Because we deemed this as an oversight we will on this occasion waive the charges at having to remove what was until this summer a healthy tree.”