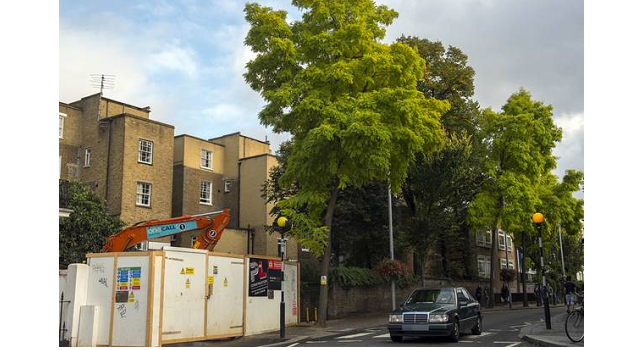 A council was accused of “vandalism” today over plans to cut down five protected lime trees as part of a redevelopment near Portobello Market.

Kensington & Chelsea is poised to accept a £78,595 payment in return for granting permission to developers  de Grey to remove the mature trees, some of which are at least 70ft high.

De Grey, in partnership with Imperial College London, are planning to build a terrace of six four-bedroom homes by demolishing student accommodation in Pembridge Road, Notting Hill.The scheme goes to the local authority’s planning committee today, with a recommendation for approval. The proposals include removing the trees in gardens by the building.

According to council documents, £78,595 would be provided by the developer to go towards tree-planting and landscaping near the site.

But opponents say there is no guarantee that the trees would be replaced, which could set a dangerous precedent for tree preservation orders.

Actor Luke De Lacey, 43, who lives nearby, said: “It’s outrageous when you think about it. It’s secretive vandalism. A cash for trees scandal, because so few people will know what has happened until it’s too late. Trees are vital for the aesthetic of this area.”  Bartender Bruno Ferrara, 32, who lives in Pembridge Road, said: “There are not enough trees in this part of London as it is, so the trees that are protected for a reason should be saved.”

Rival developer Albert Bridge Properties has drawn up alternative plans which would retain the trees and the gardens threatened with destruction.

A spokesman for the company said: “This proposed deal to sell off tree preservation orders for cash is a new and disturbing development.”

A council spokesman said that no decision had been made and the planning committee would “weigh up the different aspects of the proposals” and consider the views of residents.

De Grey referred all enquiries to Imperial College, which owns the freehold of the site.

An Imperial College spokeswoman said its  proposal would “enhance the character and appearance of the Pembridge Conservation Area while securing a financial contribution of £985,000 towards affordable housing delivery”.

She added: “In addition the college would contribute £78,595 towards planting new trees and creating new high quality green spaces in order to mitigate for the loss of six trees resulting from the development.”