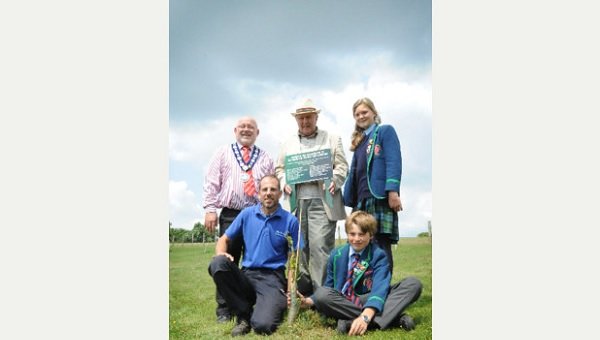 A copse that was ripped from the ground while travellers were camped in Sherborne have been replaced by the town council.

On Monday, June 23 a plaque unveiling ceremony took place at the Queen Elizabeth Jubilee Copse at the Terrace Playing fields to mark the completion of a replanting programme.

The 105 saplings, that cover approximately a quarter of an acre, were given to Sherborne Town Council in September last year by the Woodland Trust.

The town council applied for the replacement “tree pack” after the original saplings, planted to commemorate the Queen’s Diamond Jubilee were uprooted.

At the time, town clerk Trevor Savage described the damage as “an act of mindless vandalism,” after the council received reports of trees being uprooted.

Around 70 travellers with around 26 vehicles moved on to the Terrace Playing Fields, on August 15 last year, and were evicted using police powers on August 21.

After they left, it emerged all 105 saplings in the copse, which was created in November 2012, had been destroyed.