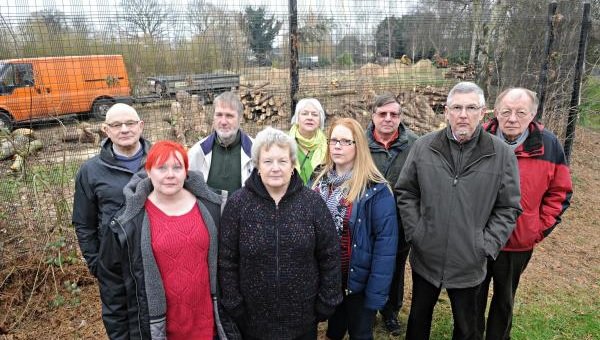 A controversial “destructive” development in Yate approved last year has sparked more outrage with the chain-sawing of trees on the site under way.

The development, on the former site of Rodford Primary School on Barnwood Road, involves the erection of 57 new houses.

The motion was passed for Bellway Homes to build the houses at a South Gloucestershire Council development control east committee meeting in September last year despite objections from residents involving the impact the development would have on trees and wildlife.

Preparation work on the site is now under way, after the chain-sawing of formerly protected Tree Protection Order (TPO) trees started on Monday, February 9.

The removal of TPO trees was authorised as part of the planning application for the development.

“I was so disappointed by this development being approved because so many protected trees in good health will be felled.

“This development will also blight the lives of existing residents who now have to live right next door to this ugly development.”

South Gloucestershire councillor for Dodington, Tony Davis, said: “There has been an ongoing campaign and saga about trying to save the trees from being damaged and cut down.

“Many residents didn’t want the houses to be built there at all and completely opposed the idea, but realistically we just can’t stop houses being built and I appreciate that when it comes to planning.

“Many of us still think the houses are being built too close to the trees and to me, it’s nice to have them there and a grass area and preserving the wildlife is important.”

Technical director for Bellway Homes, Dan Holland, who spoke for the developers at the meeting last year, said: “We’re really excited about the opportunity to make a site like this available to the community.
“As well as providing the area with new homes and open spaces, the project will create employment for local businesses from the construction.”

A spokesman for Bellway Homes said: “We have a professional tree surgeon currently on site. We are working to an authorised arboricultural survey to remove whole trees and parts of trees.

“We can confirm that we have authorisation to carry out these works as part of our granted planning permission for the site.”

Bellway Homes expects building work of the two, three and four bedroom homes to begin at the end of March or start of April.