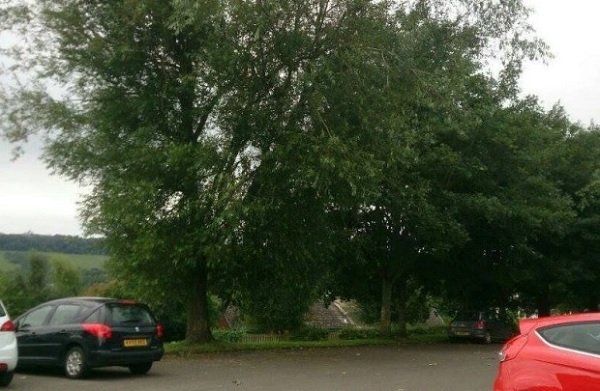 A number of trees have been marked to be felled at Langlee Community Centre in the Scottish Borders, to make way for an extension to the exisiting car park.

The trees, which run adjacent to the drive at the centre, were marked with yellow crosses last week.

The spokesperson told us: “The trees are being removed in order for improvements to the car park to be made.

“A number of replacement trees will be added as part of the scheme.”

But not everyone is happy about the felling. Ian Childs informed us the trees were about to be felled. He told us: “Surely they could have kept the trees and made an overflow car park behind them.

There is no record of the felling on the council’s planning portal. The spokesperson said: “Certain works by a council do not require planning permission, depending on a series of factors including cost.

“The council’s planning department was consulted as part of the process and was satisfied that planning permission was not required.”

Earlier this year, the council was criticised for felling 150 protected trees opposite to the entrance to the Tweedbank terminus of the Borders Railway, in preparation for the proposed building to house the Great Tapestry of Scotland.

However, a new site in the centre of Galashiels now appears to be the preferred site.

It was later claimed that the trees were felled due to their poor health, as they had not been maintained since planting.