Contractor falls 30ft and is pinned to ground after branch snaps 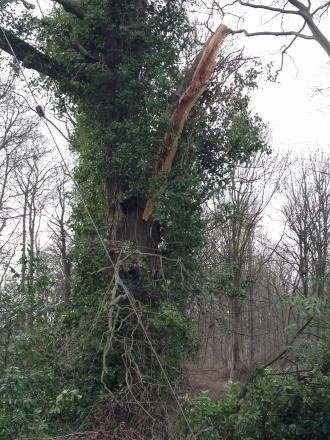 A contractor plummeted 30ft and was hit by a falling tree branch after it collapsed underneath him on Tuesday.

The 28-year-old man was trimming a three tonne tree in woodland outside the grounds of Whitworth Hall Hotel, near Spennymoor, County Durham, for Northern Powergrid when the branch he was resting on snapped.

Firefighters, paramedics and the Great North Air Ambulance Service arrived at the scene shortly after 9.45am and the man was airlifted to James Cook University Hospital in Middlesbrough with suspected broken ribs and wrists.

An Air Ambulance spokesperson said: “His injuries were non-life threatening and he was stable on arrival.”

Station manager Steve Cummings, of County Durham and Darlington Fire and Rescue Service, attended the incident, which was on private land close to Whitworth Church, with a crew from Spennymoor.

He said the man had managed to free himself by the time firefighters arrived.
“He was resting on the bough of the tree and the bough snapped,” said Mr Cummings. “As it fell to the ground, he fell too and was trapped beneath it.

“Fortunately, he fell on soft ground covered in leaves and twigs. He managed to free himself before we arrived.
“It is believed he suffered broken ribs and a broken wrist.”

A spokeswoman for Northern Powergrid said: “At 9.45am this morning one of our vegetation management contractors, who was trimming trees near overhead power lines near Whitworth Hall, has fallen from the tree he was working on and has been injured.

“The contractor was airlifted to James Cook Hospital to assess and treat his injuries, which we currently understand are not life-threatening, and we wish him a speedy recovery.

“We are now working with our contractor to investigate the cause of the accident.”