Concerns that tree felling may have contributed to A82 landslide 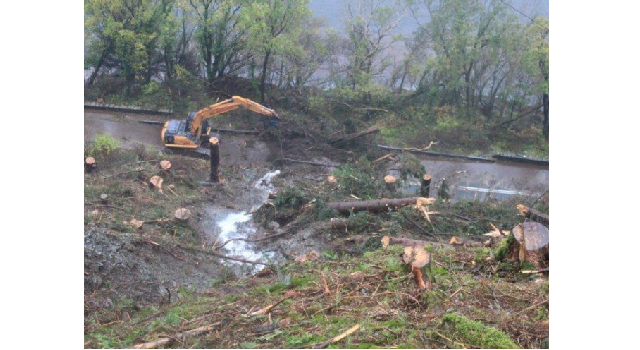 Forestry Commission Scotland has come under fire from people who believe tree felling on a steep bank above the A82 may have contributed to one of the landslides that closed the road at the weekend.

The A82 Inverness to Glasgow road was blocked for more than 30 hours following two landslides that happened during persistent rain – leaving motorists facing a 162-mile diversion.

The slips were at Glenrigh, about a mile north of Corran, and at Corrychurrachan Bridge, to the south of Fort William, in Lochaber.

The A82 remained closed for most of Monday due to the Corrychurrachan slip, with traffic being diverted via the A9 Inverness to Perth road.

It reopened to single file traffic, controlled by traffic lights, at about 3.30pm.

Forestry Commission Scotland (FCS) has been carrying out tree felling operations on a steep bank above the A82 at Glenrigh and Councillor Andrew Baxter, Fort William and Ardnamurchan, said locals believed this may have contributed to the landslide at this location.

He said: “A year ago, I asked FCS whether such extensive tree felling could lead to substantial landslips and they said it was not going to be a problem.

“However, across south Lochaber, there is now a distinct suspicion that their tree work may have been a contributory factor in this landslip and I think local people need reassurance.”

Mr Baxter added that they were very grateful to the teams from the various public bodies that had been working to clear the road in “horrendous conditions”.

Stewart MacLean, of the A82 Partnership, pointed out the latest closure of the busy trunk road underlined the “frailty of the road network” in this area.

He said: “Once again it has disrupted the economy of the area and the social commitments of the community.”

Mr MacLean also criticised FCS for leaving felled trees on the hill as these were washed down onto the road.

And he said Traffic Scotland had failed to provide the public with accurate information about the closure of the A82 on Sunday and yesterday.

He said: “Regretfully Traffic Scotland has, once again, not been able to keep up with developments, having originally reported the closure as being between the A830 and Fort William and not having updated its website until reminded to on Monday morning.

An FCS spokesman said: “We have had exceptionally high levels of rainfall over the past two days, which has caused a number of landslips in the area.

“The areas affected are not just where felling has been taking place, but right across the whole region.”

He added that their main priority yesterday was to work with trunk roads maintenance agency Bear Scotland to assess the areas affected to ensure safety and to clear the road as soon as possible.

“Then we will investigate further to see exactly what has happened,” said the spokesman.

He said: “During the current incident all of these outlets were in use and have been updated regularly throughout the period.

“We understand the need for timely and accurate information and have been pro-active and consistent from the outset that the A82 closure was between Ballachulish Roundabout and West End Roundabout in Fort William.”