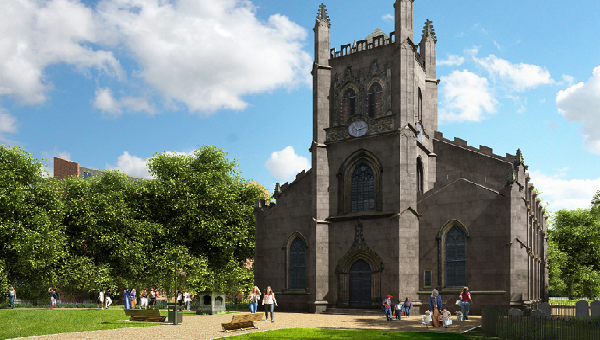 Locals have raised concerns after it was proposed that 27 mature trees in a leafy churchyard in Leicester’s Cultural Quarter could be felled. The reason for the proposed felling is the council’s desire to make the area more attractive. The trees under question are located around St. George’s church.

Ward councillor Patrick Kitterick said some people would not want to see the churchyard opened up following the outrage caused when the council cut down 84 trees in Victoria Park earlier this year as part of £1.8 million to improve the processional route to its war memorial.

He said: “I was sanguine about cutting down trees but that was until someone turned up in Victoria Park with a chainsaw.

“I am a little bit wary about the loss of 27 trees from St George’s churchyard and some of my residents are still smarting from the loss of trees in Victoria Park.”

Assistant mayor councillor Sue Waddington has been put in charge of a project to improve the area because city mayor Sir Peter Soulsby has a family financial interest in The Exchange bar nearby. She said losing 27 trees was just one option under consideration and that another involved the felling of just nine trees.

She reasoned: “Some, if not all, are causing damage to the church.”

She pointed out that the more trees are removed the greater the open space in what she said was a gloomy and oppressive area. The public will be allowed to have its say after a consultation on the options on Wednesday. There will be a day-long event at LCB Depot, in nearby Rutland Street. The proposals will also be available to view until Monday, July 11, at the depot, on weekdays from 9.30am to 5.30pm, and on Saturday, July 9, from midday until 4pm.

Footpaths would be reconstructed in high quality natural stone and resin-bound gravel and some of the railings at the entrances to the churchyard would be removed under the new plans.

A new entrance directly in the courtyard of LCB Depot could also be created.

Both entrances at Orton Square and Colton Square would be improved and the council is also considering relocating the ceramic mermaid panels from West Bridge into the revamped churchyard, bringing the artwork back closer to its original home.