Concern at number of trees lopped or felled 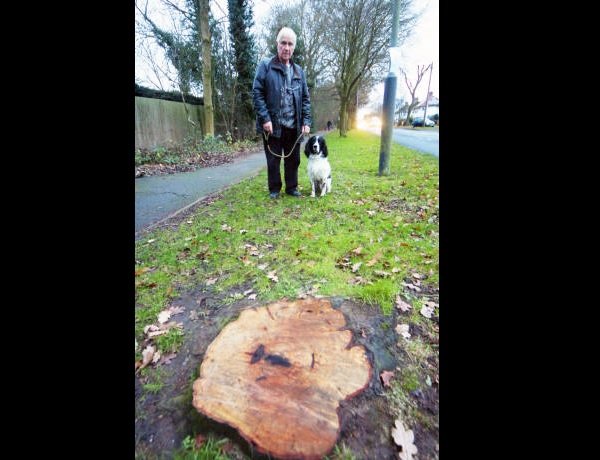 Council bosses have been accused of damaging Rugby’s habitat by ‘butchering’ trees in the borough.

Rugby man Mike Sharp accused Rugby Borough Council of showing disregard for residents after what he claims are a number of incidents where trees have been needlessly removed or lopped back.

The council chopped back a weeping willow on Lower Hillmorton Road where Mr Sharp lives last month and he has since received correspondence informing him an oak on the same piece of land is set to be taken down altogether.

Mr Sharp, who has lived in Rugby for 35 years, said the council’s actions highlighted a ‘lack of thought’.

“There just seems to be a complete disregard for the habitat,” Mr Sharp said.

“This latest incident is just another example of what is a continuing problem.

“In the 35 years I’ve lived here I’ve seen six oaks in the area go, many of them had been there for well over 100 years.

“I don’t understand what the policy is or if there is one at all. The reasons given are often quite vague.”

Mr Sharp said in many cases the trees support wildlife which is then impacted by them being removed.

“Once these trees are lost, they are lost for ever to future generations.

“Shouldn’t residents have at least some say on this?

“English oaks support a huge amount of life so it isn’t just about the visual aspect.

“The reassurance that the oaks will be replaced is also a hollow one, for it has been made many times, and many trees have been planted, only to subsequently die while still saplings.”

Council environment chief Coun Sally Bragg insisted trees were only ever removed as a last resort.

“The willow tree was unbalanced with a number of branches overhanging a busy road,” she said.

“Though the results of pollarding can appear severe, the tree will grow back stronger during the spring and summer, and the procedure extends the life of the tree.

“A recent inspection of the oak tree revealed the tree to be in very poor condition, with cankerous growth and cracks rendering the tree’s crown structure very weak. We also found evidence of a beetle infestation, which commonly occurs when a tree is in poor health.”

She said the council was liaising with the Forestry Commission before making a decision on whether to remove the tree.

And she added the council was proud of its record of having planted thousands of trees across the borough in recent years.