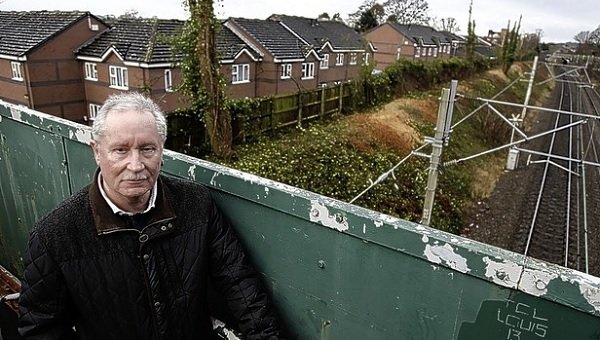 Families living near a railway line have complained after contractors chopped down trees and shrubs to stop leaves falling on the track.

Network Rail said the action was necessary as vegetation within five metres of the line in Stone has become a serious safety concern.

But residents of Granville Terrace say the ongoing work has already led to an increase in noise levels and the area looking sparse.

Jacqui Bennett said she understood the need for safety, but not at the expense of all the wildlife.

The 53-year-old, from Granville Terrace, added: “We can now see right into the houses across the rail lines, which we were not able to do before.

“The noise levels have increased and, the fear for me, is when it is all taken away, the area will look bland and the noise will be deafening.

“The birds that rely on the habitat will disappear. It’s not environmentally friendly.

“Network Rail is taking it to the extreme. It’s devastating.”

For 61-year-old John Mohin, who also lives in Granville Terrace, the trees are an integral part of the avenue.

He said: “We are trying to preserve the essence of Stone. I do respect rail safety and that is a key point. I’m hoping we can all come to a compromise on the situation.

“The trees being cut back have made a notable difference in noise levels and I can see it becoming noisier.”

Jonathan Bell, aged 61, from Granville Terrace, said: “I appreciate that some maintenance is required to avoid things like landslides and soil slips and safety is important.

“But they’ve already started work and taken everything. It will be very stark.

“To say they are doing this on the grounds of safety is ridiculous.

“A hedge isn’t going to fall on the tracks. And most of the trees are not in a dangerous position.

“Some of the trees have been there for around 100 years. It’s environmental destruction.”

A Network Rail spokesman said: “We are reducing the amount of vegetation alongside the railway to minimise the impact on the reliability of train services.

“Falling trees during bad weather, and the annual leaf fall in autumn, can cause delays and disruption and impact on passengers’ journeys.

“With 20,000 miles of track and an estimated 2.5 million trees growing on the line side, managing vegetation is not just a full-time job, but one of our most important safety issues.

“We recognise this work will affect the appearance of the railway, but have outlined the reasons with residents.”