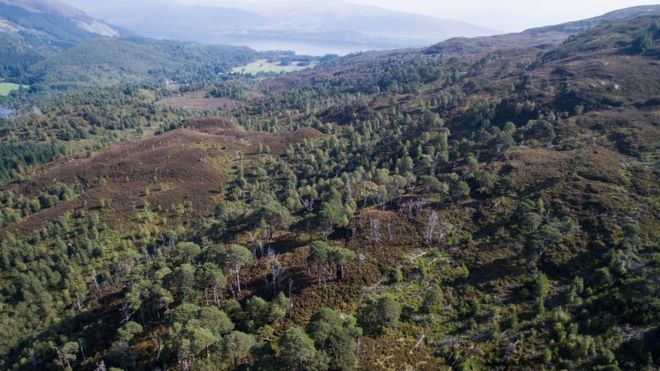 A community group has worked with the Woodland Trust to purchase a historic pine forest in the Highlands.

The woodlands at Loch Arkaig near Spean Bridge were used for training commandos in World War Two.

An appeal launched in April helped to raise £500,000 towards the cost of buying the land. The People’s Postcode Lottery also provided funding.

So far £2.9m has been raised to cover the cost of purchasing the forest and funding restoration projects. Arkaig Community Forest hopes to raise a total of £4.5m.

Some pines in the forest still have scorch marks from the soldiers’ exercises with live ammunition.

The damaged trees include Scots pine preserved after being “cooked” in their own resin after the ammunition caused a fire.

Arkaig Community Forest in partnership with the trust raised thousands of pounds to buy the 2,500 acre site.

The forest’s history also includes a suggestion that French gold to fund Bonnie Prince Charlie’s 1745 Jacobite Rising was hidden, and then lost, in it.

More recently, it was a location for the film Harry Potter and the Deathly Hallows. Characters Harry, Hermione and Ron fly over it on a dragon before they jump off the beast into a loch.

It was rumoured filming was cut short in the forest because of biting midges.

Gary Servant, of Arkaig Community Forest, said: “This is a great moment.

“The land has been bought and we have a fantastic opportunity to work together to restore these native woodlands and to reconnect local people with their forests.

“Everyone is very excited and we give heartfelt thanks to all who have supported us and have contributed to the appeal.”

The Woodland Trust’s Scotland Director Carol Evans said: “We are going to consult widely on our detailed plans for the wood.

“We want to see this special place established as a benchmark for the joint regeneration of both its native forest and local community.”

Simon Hodge, chief executive of Forest Enterprise Scotland, said: “This was one of the last applications to the National Forest Land Scheme.

“It has been great to see the way Arkaig Community Forest and Woodland Trust Scotland have worked in partnership to achieve their joint aims.”