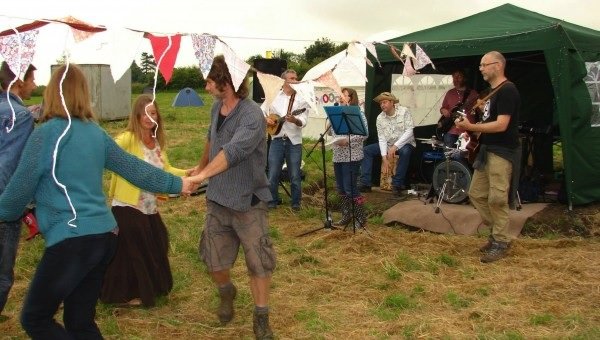 It has already planted thousands of trees, and it plans another big plant this winter. The co-op, an industrial provident society for the benefit of the community, raised finance through a share issue which generated over £50,000 from 180 shareholder members. Coupled with a £52,000 grant from the National Forest Company, this covered the £90,000 purchase with some to spare.

The aim now is to create jobs and opportunities in a space where the community can meet, learn and celebrate. There will be a combination of food production and forestry, and the emphasis will be on financial and environmental sustainability.

Shareholders are already having their say. Popular suggestions for the site include fruit growing, trees for timber, biomass and crafts, ponds, celebration spaces and training and education.

Sarah Spencer, this year’s World Wildlife Fund UK green ambassador teacher of the year, is among the founders. “We’d been trying to negotiate with other landowners like the Forestry Commission for several years but that didn’t come to anything,” she says. “When some land came up on the open market we thought we’d go for it.

“We had to move very fast, but we’d been planning for about three years. The business model is to fund the infrastructure with grants, but once that’s in place it will be self-sustaining. We’ll be selling produce, running courses and providing a venue for events such as green weddings and birthday parties.”

The co-op is already hiring out a yurt for family glamping. “It all helps,” says Sarah. “And it’s part of the message, which is an appreciation of nature, finding out about woodland and the environment, and experiencing low-impact living.

“For example we’ve built a compost toilet. Most people haven’t experienced one before. It demonstrates low-water sewage and the land benefits from the fertility, rather than flushing it down the toilet.

“Everything that brings an income will meet our aims and objectives, and everything we’re planning has got to be useful to our community or the project for bringing in income. We’re showing that woodlands can be fabulous places to be, but that they’re also productive.”

Last winter the community planted 2,400 trees, including 1,000 native hedge plants. The hedge includes edible plants such as crab apple, damson, hazel and elder. In the wood there are sweet chestnut and hazel for coppicing. Over 100 people of all ages took part in planting, including representatives from local schools, cubs, scouts, the National Forest Company, Melbourne Parish Council, East Midlands Bodgers and Melbourne Parish Church.

Community involvement grew throughout 2014. Easter events included an egg hunt, a chicken-keeping demonstration and a wildflower patch dig. Throughout summer there were weekly workdays, along with wildlife spotting and social events.

With the co-op’s planning application for development and landscaping now approved, there will be more orchard and native tree planting in December and February. Trees have been donated by Million Trees Derbyshire, the Woodland Trust and the Tree Council’s Orchard Windfalls Fund.

The co-op is seeking grant funding and corporate sponsorship for the larger infrastructure, but for smaller elements of the site it is using reclaimed materials. The compost toilet was made entirely from recycled materials and voluntary labour.

Sarah explains: “We’re seeking a corporate partner to help fund a roundwood timber-framed classroom, but in the meantime we’re cracking on with developing the site and moving forward with our plans.

“Things are never standing still here and our motto has become ‘just do it’. We’re very pro-active, and even cheeky in asking for stuff, but so far that attitude has paid off.”

Throughout the process, the focus has remained firmly on the community – asking what will be useful now, and what will be useful in the years to come. “Children and families are at the core of what we’re doing,” says Sarah. “So far they’ve helped plan the site, planted trees, and raised money via a midsummer dance.

“Our project is about education and learning skills that will be vital for our ability to live sustainably both now and in the future. We’re working with children at Melbourne Infant and Junior Schools, having created a food garden there, and Whistlewood will expand the resources for young people to learn skills, appreciate nature and ultimately earn livelihoods.

“One of the school’s ‘Eco Warriors’ was recently highly commended in the National WWF Green Ambassador Awards and we’re aiming to inform and encourage a whole generation of green ambassadors who have the skills and knowledge to pass on.”