Climate change could lead to raging infernos throughout Europe 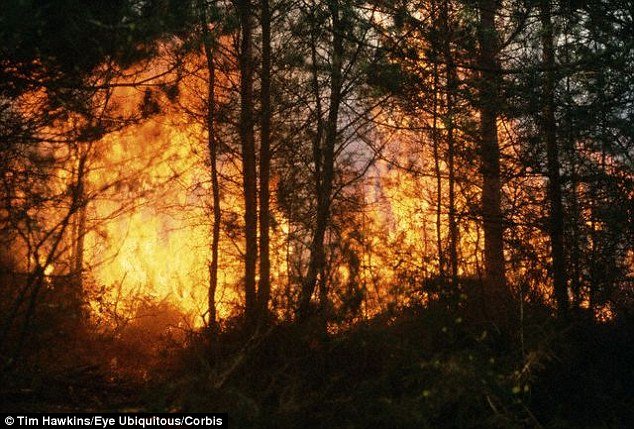 Climate change is expected to contribute to a ‘dramatic increase’ in forest fires in Europe, according to a new study.

The research claims that increased temperatures and longer droughts will create a 200 per cent increase in raging forest infernos by 2090.

However, preventive fires could keep that increase to below 50 per cent, the Austrian scientists claim.

Researchers at the International Institute for Applied Systems Analysis focused on two strategies to mitigate the impact: prescribed burns and fire suppression.

‘There is still a big debate on the effectiveness of prescribed burning as a forest fire management tool,’ said Nikolay Khabarov, who led the study.

‘This study shows that it can be a promising option to protect European forests from the impacts of climate change.’

But in a statement, the research team said no study has yet managed to find out the cost and benefit of such efforts at a continental scale.

‘European forests are vital reservoirs for wildlife, for biodiversity, and for our own enjoyment and well-being,’ said Dr Khabarov, ‘We need to find ways to protect them.’

The researchers claim that in Europe, over 95 per cent of all forest fires are caused by humans, including negligence when smoking cigarettes,using campfires and other open fires that are not put out properly, and even arson.

‘We could prevent many of these fires simply by being more responsible.’

The findings follow a recent report that claims no one will be untouched by climate change with storm surges, flooding and heatwaves among the key risks of global warming in the coming decades.

This was the warning made in the Intergovernmental Panel on Climate Change (IPCC) Working Group II report, published in March.

The report said that violent conflicts, food shortages and serious infrastructure damage were also predicted to become more widespread over the coming years.

It argued that rising temperatures will exacerbate poverty and damage land and marine species.

It also claimed that the world is in ‘an era of man-made climate change’ and has already seen impacts of global warming on every continent and across the oceans.