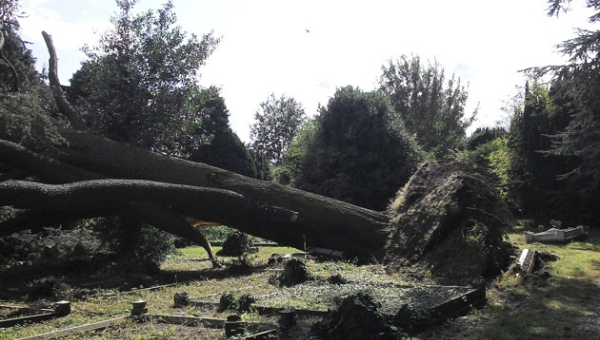 A clear-up operation is in process at a March cemetery after torrential rain brought down two trees.

The rain storms which battered the town August 8 are believed to be the cause of two cedar trees crashing down onto headstones in the Station Road cemetery.

Fenland District Council is now employing arboricultural experts from The Landscape Group to cut up the trees and remove the wood.

A further tree will be felled later this week as a precaution after it has also been damaged.

The work is expected to take at least a week.

A spokesman for the district council said: “As far as individual graves are concerned, we won’t know how many headstones or surrounds have actually been damaged until the clear-up is complete. From what we can see at the moment, the damage is fairly limited.”

Roads were also closed off and part of a riverbank collapsed when torrential rain and hail battered March, Chatteris and Wisbech.

March was the worst hit by the deluge and firefighters are estimated to have pumped out 11.5 million litres of water from properties and infrastructure in the March area.

Some residents were forced to go to rest centres to escape the floods and a number of stores in the town, including Tesco in Hostmoor Avenue, were forced to close their doors to shoppers after water seeped into buildings.