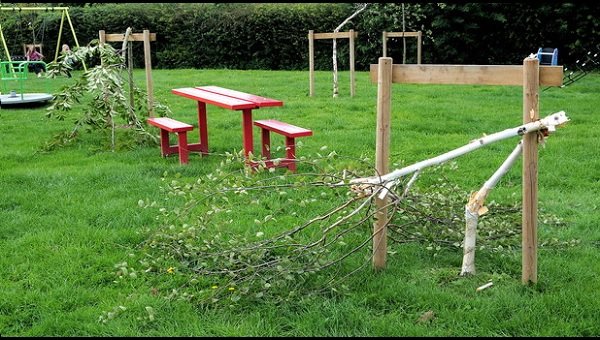 Villagers in Clarborough have been left upset after several trees planted to commemorate World War One were damaged in an act of mindless vandalism.

Members of the parish council describe themselves as ‘distraught’ after the discovery that four of the saplings had been targeted, just weeks after they were dedicated in a special religious service.

They were among a total of 12 planted in the children’s play area behind Clarborough village hall to mark 100 years since the outbreak of the war, in which several local men fought and died.

The four silver birch trees have been completely snapped at the trunk in an incident which is ‘out of character’ in the village.

They were bought with funding from the Woodlands Trust and a plaque was laid alongside them to remember Clarborough’s war dead.

“The trees were blessed by a local reverend when they were planted so it’s very disrespectful.

“We have a small amount of vandalism in the village but it’s a couple of years since trees were last damaged – and these trees are much larger.

“It’s an active village and this is out of character for Clarborough. It could well be people from outside the village.”

Notts Police are now investigating the incident and the parish council are looking into whether CCTV can be installed near the play area to prevent further incidents.

“We are hoping to replace the trees. We’re all very upset, as they were such nice trees,” added Cllr Codling.