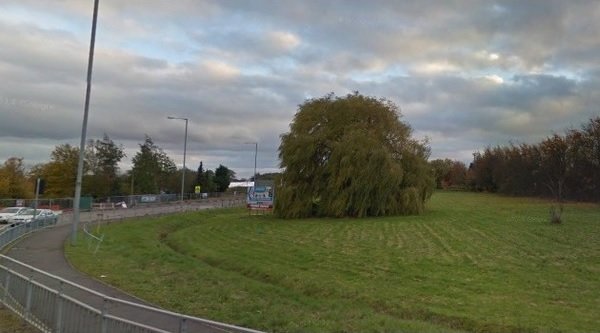 A nature expert says the felling of a 50-year-old weeping willow tree on a main route is “vandalism”.

The tree had stood on Bardills Island, Stapleford, at the junction of the A52 Brian Clough Way and Toton Lane, for around half a century and was a “major feature in the landscape”, says Norman Lewis.

The unprotected tree was on private land and its owners say it was diseased and in danger of falling down, potentially causing a hazard.

But Mr Lewis, who is chairman of conservation group the Friends of Toton Fields and was awarded the MBE as a founder of Nottingham Wildlife Trust, where he worked as principal conservation officer, says he has had a look at the remains and it was “perfectly healthy”.

Mr Lewis, who has 50 years’ arboricultural experience, said the tree would have provided a natural, “softening” focal point near an otherwise industrialised area which is being made into a park-and-ride site for the new tram line.

He said: “The tree was a major feature in the landscape.

“It was the last thing we wanted – to lose a tree of that stature in that area.

“You can’t replace something of that age. It’s going to be another 50 years or so before it achieves the same size – it’s just vandalism really.”

Mr Lewis, of Toton, said at least 10 local people had approached him with concerns that the tree had gone.

He added: “I had a look and it was as healthy as most willows.”

But Paul Stone, regional director of Signet Planning, acting on behalf of the site’s owners Peveril Securities, said: “The tree was full of fungus and therefore the recommendation was to remove the tree and that’s what we’ve done.”

It followed the results of a survey carried out by Derby-based chartered arboriculturalist John Booth.

“It could have fallen on somebody. I wouldn’t have recommended its removal if it was going to be there for years.

“I’m not in the business of condemning trees where it can be avoided when you’ve got live trees that potentially threaten busy roads like the A52, clearly safety is paramount.”

Toton councillor Mia Kee had written about local concerns about the felling of the tree on her website and also tweeted Broxtowe MP Anna Soubry about the issue.

Ms Soubry tweeted back that Broxtowe Borough Council told her it was on private land and was diseased and that it was “very sad”.

Cllr Kee replied: “So very sad. Was such a landmark around here & the most beautiful willow I had seen.”

Stapleford councillor Richard MacRae said he had heard from around a dozen residents who had asked why the tree had been felled.

“People aren’t happy it’s been cut down – it was a landmark, it’s been there for years”, he said.

The tree was planted as part of the landscaping of Gregorys Gardens, in honour of the famous rose-growing family of Chilwell.