CityTree’s ‘moss filter’ absorbs as much pollution as 275 trees 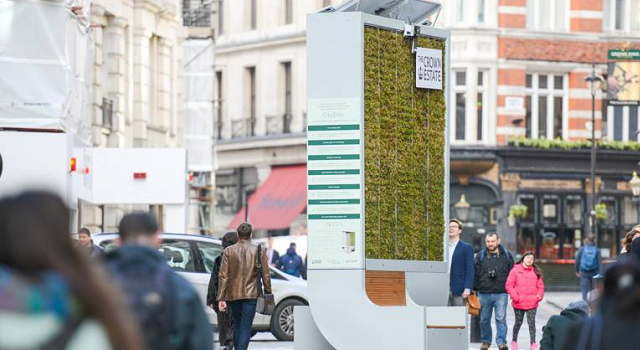 The ‘living wall’ moss technology, dubbed the CityTree, uses a combination of mosses, cultivated to thrive in urban areas, and is meant to have the capability to remove air pollution from the air.

The developers claim that the instillation can remove air pollutants, including nitrogen dioxide and particulate matter from the surrounding area by up to 30%.

The installation powers itself with solar panels, with rainwater collected and automatically redistributed using a built-irrigation system, providing the shade and moisture that would otherwise prevent mosses from developing in a city environment.

CityTree have previously been trialled in Berlin, Paris, Amsterdam and Oslo.

The technology is particularly effective in pollution hotspots and areas with high dwell-time, whilst combatting urban heat island effect with a wall of irrigated mosses.

Commenting on the installation, Cllr David Harvey, Cabinet Member for the Environment, Sport and Community at Westminster city council said: “It will be fascinating to see what impact The CityTree has on pollution in the local area. This is just one example of the new technology we want to test across Westminster. Air quality is the number one concern for our residents and with over a million people moving into and travelling to our neighbourhoods each day it is crucial that we make more strides to clean up our air and tackle poor air quality for residents and visitors alike.

“It is going to take a wide range of measures to tackle pollution in central London. The ten pledges set out in our Air Quality Agenda outlines policies to make a real difference – whether it’s reducing the number of dirty journeys, introducing new cleaner technology or encouraging better habits – we want Westminster to be an example for cities across the world.”

Peter Sänger, Founder and chief operating officer of Green City Solutions said: “In a short time, the CityTree has already become established as an effective way to create clean air environments in some of Europe’s most polluted cities. We are delighted that London can now be added to this list and hope to see many more CityTrees across the country in the years to come”

Sukhbir Sidhu, founder and chief executive of Evergen Systems said: “In 2016, we started looking into technologies for cutting air pollution. Getting the CityTree to London has been a two year journey and we are very excited about the future for clean air in our towns and cities.”