Churston and Brixham woodland to be destroyed after disease outbreak 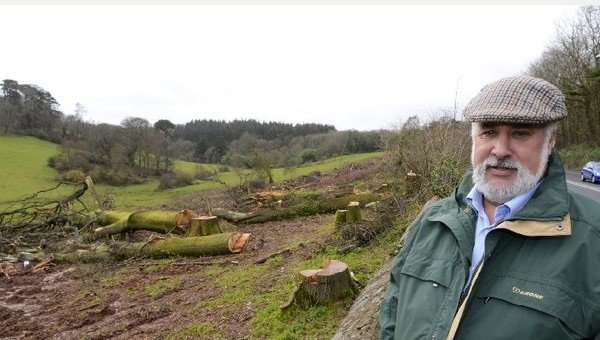 A hundred acres of woodland at Churston — equivalent in size to around 70 football pitches — will be destroyed after a confirmed outbreak of a devastating tree disease.

Larch and sweet chestnut within historic woodland at 65 acres of The Grove and Ball Copse, and around 40 acres at the Lupton estate and nearby farmland in Churston will be felled next month.

Derek Mills, ward councillor, said: “It will absolutely change the landscape. I am so disappointed that it has reached Churston and on such a large scale.”

The Forestry Commission first identified the deadly disease — Phytophora ramorum — in an aerial survey by the large patches of brown canopy seen from the air.

Further ground inspections and laboratory tests confirmed the presence of the disease.

Ramorum disease affects a wide range of plants, and was first spotted on larch trees in the south west in 2009.

It has since affected larch woodlands and was most likely spread to larch trees from rhododendron bushes, which are very susceptible to it and which produce large quantities of the spores which spread the disease.

Now an official notification has been issued to landowners and affected trees and potential hosts have to be felled by September.

It will mean public access to the woodland areas will be closed or diverted while work takes place.

Chris Lingard, countryside manager with Torbay Coast and Countryside Trust, said: “It will look pretty drastic and the area will look very different for some time.

“My heart sank when we received the notification because I was hoping we would get away with it but I had a feeling it was coming our way.”

The trust estimates the clearance work on its sites will cost around £10,000 with further licenses needed to clear diseased timber from site.

The 56-acre Grove is on the hills above Elberry Cove and Churston Cove.

Larch and sweet chestnut make up 30 per cent of tree species in the woodland and will all have to be felled. The six-acre Ball Copse, made up of 50 per cent larch, will also be affected.

Mr Lingard said: “It is a significant amount and the visual impact will be quite devastating.”

But he said, in the long term, biodiversity could be increased. He said: “Larch is not a native tree and is grown as a crop. What we hope to do is replant with native trees.”