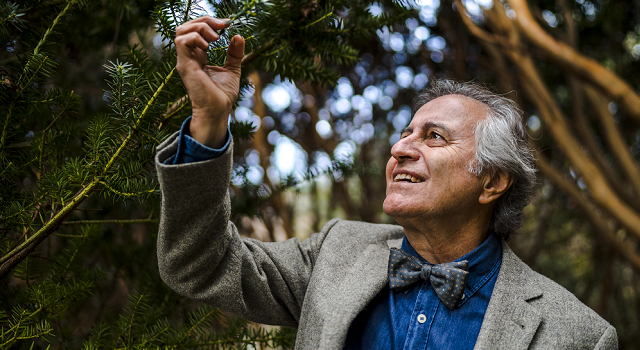 The Eden Project’s work in preserving celebrated monkey puzzle trees as well as many other Chilean species has been praised by acclaimed documentary maker and author Rodrigo Fernandez, who has just published a definitive guide to trees from his home country growing abroad.

Rows of monkey puzzles and other Chilean plants are thriving on a quiet south-facing hillside just outside the former china clay quarry, home to Eden’s world-famous Biomes.

The Chilean arboretum was planted around the time Eden opened in 2001 as part of the Royal Botanic Gardens Edinburgh Conifer Conservation Programme. It was visited by Rodrigo during a stay in the UK to promote his lavish book Chilean Trees Around the World, a labour of love ten years in the making.

In Chile monkey puzzles – proper name Araucaria araucana and the National Tree of Chile – are under threat from disease and populations are fragmented. The trees appear on the International Union for Conservation of Nature red list as endangered.

With their upturned branches and prickly leaves, monkey puzzles have a special place in Cornwall as they gained their common name when a specimen was planted in 1834 at Pencarrow House and a guest quipped that it would be a puzzle for a monkey. There are more than 70 planted in the arboretum at Eden.

Rodrigo said: “It is wonderful to see these trees and other trees and shrubs from my home country doing spectacularly well in Cornwall. In fact the monkey puzzles seem to grow better and faster here at Eden than in their native habitat and seem to love the climate here.

“With the forests in Chile under threat, it is very comforting to know that at Eden and in other places in the UK these trees are healthy and prospering. This is an important conservation story for now and for the future.”

“The feedback from Rodrigo was incredibly encouraging and we are planning to expand our monkey puzzle plantings with our partners at RBG Edinburgh. All conservation is based on partnerships and we are delighted to display the wonders of the Chilean forests to our guests and to provide a long term sanctuary for these iconic trees.”

Rodrigo was visiting Eden with his wife Francisca Bustos, Chilean writer and photographer Iberia Torres and Peter West from the Anglo-Chilean Society.

The Chilean arboretum at Eden features in a chapter of Rodrigo’s book. The lavish study is a selection of 60 stories of Chilean trees around the world, encompassing 50 species.

Before presenting a signed copy for the Eden library, he gave a fascinating talk to Eden horticulturists about how plants from Chile have found their way into gardens across the globe and are particular favourites in the UK.

On their tour of the arboretum,  as well as viewing the monkey puzzles, the visiting party were able to see other fine specimen trees including Alerce (Fitzroya cupressoides) and the Cloud Podocarp (Podocarpus nubigenus).

Alongside the towering conifers are many plants that have become firm garden favourites in Britain. Examples of Fuchsia, Lobelia, Geum, Gunnera, Escallonia and Berberis form a key part of the collection.

The garden is filled with plants from the Valdivian Forests biodiversity hotspot in Central Chile, which represents almost one third of the world’s few remaining large tracts of relatively undisturbed temperate forest.

The collection began with collaboration between Eden, the Royal Botanic Gardens Edinburgh and their International Conservation Conifer Programme.

The Chilean garden is open to the public and the entrance is behind Eden’s Pineapple car-park.

To view a film of Chilean Trees Around the World go to https://animoto.com/play/dz16y09fNLHie95sCpPR1w