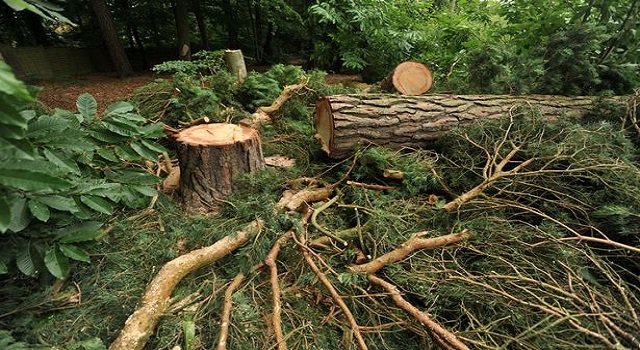 The council’s parks manager Andy Ford said he was appalled by the sheer ‘numbskull’ behaviour of a gang of youths, who residents said set upon two established trees with chainsaws.

Mr Ford said residents in Sandy Lane and The Potteries reported hearing a number of petrol motors firing up at around 9pm on July 8, seen in the hands of a couple of young men.

Their first target, said Mr Ford, was a beech tree, some 20in in diameter and around 30ft to 40ft tall. They then started gouging away at a 100ft pine tree, around 28in to 31in in diameter.

The trees are situated down a small lane, backing on to the M3. Mr Ford said had the pine fallen, he had little doubt it would have taken down mains power lines along the motorway.

“We took calls from a number of concerned residents who reported the matter to us and the police,” he said. “I cannot stress just how dangerous an incident this was.

“Either they were so numbskullishly stupid as to not notice the power cables, or, as I suspect, they were sinisterly targeting them to bring down the lines.

“It’s such a shame though. The pine was a beautiful, healthy tree. They took a vicious cut out of it but didn’t manage to bring it down.

“But to leave a tree in that state is immensely dangerous. It could have fallen before we got there to tidy up. If it had gone down on the power lines, or even the M3, we would have had a major incident on our hands. We were inches away.”

Mr Ford said the council hoped the incident would serve as a warning to chainsaw users or owners to ensure their equipment is stored securely and that users handle any such equipment safely.

He added he had never come across such reckless behaviour in more than 20 years in the job, and only a handful of any similar attacks in the past.

Councillor Sue Carter, cabinet member for leisure and youth at the council, said: “This was an incredibly reckless and dangerous thing to do. We believe this was a deliberate attempt to cause damage to the power supply.

“If they had succeeded, they and their families may have faced a far more serious outcome.

“I find it unbelievable these young people had access to a chainsaw. I would appeal to parents to make sure dangerous power tools are securely stored.”

A spokesman for Hampshire Constabulary said this incident was reported at 9.15pm but the culprits had fled by the time officers arrived.

“We were told it was two youths involved with a chainsaw,” he said. “One tree had been cut down, and an attempt made to cut down another.”