Centuries-old tree chopped down to make way for MetroBus 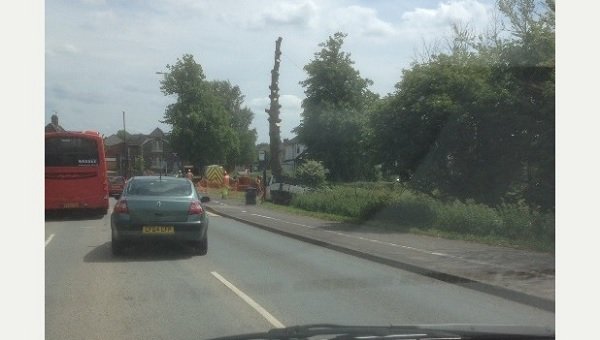 A horse chestnut tree believed to be at least 200 years old has been chopped down in Stapleton to make way for the new high-speed MetroBus.

Resident Michael Catley took these photos as the tree in Stoke Lane was removed.

The site is opposite the area where campaigners occupied trees a few months’ ago until they were evicted after a court order.

Mr Catley, 70, a retired HGV mechanic of Duchess Way, told the Post: “It was a magnificent tree in absolutely perfect condition.

“I can’t believe the tree was taken down because there was nothing wrong with it.”

He said that as a child, he used to pick up conkers from underneath the tree.

The MetroBus project is being promoted by the West of England Partnership, a body which represents the four councils in the former Avon area.

A spokesperson for the partnership said that any trees had been removed after the necessary permissions had been granted.

She added: “Whilst we may have permission to remove trees we are reviewing each tree once on site just to make sure that it can’t be kept.”

This horse chestnut had to be removed to make way for a new drainage pipe in Stoke Lane.

The spokeswoman said the pipe needed to be installed in the footway and verge for ease of maintenance and to prevent the closure of Stoke Lane while the work was carried out.

She said: “We also discussed placing the pipe under the footway but it was found that the pipe and trench would still severely impact the root system of the tree and risk instability.”

A five week tree sit-in next to the allotments on the other side of the road to the tree came to an end in March when the final seven protesters were safely extracted from their 60ft high perches.

They made temporary homes in three poplar trees, as direct action against the proposed MetroBus route through what they say is an area of prime growing soil and wildlife which should be protected from development.

Experts from a specialist firm spent a weekend carefully lowering the campaigners from their makeshift platforms.