Celebration planting to mark 25 years since trees were saved 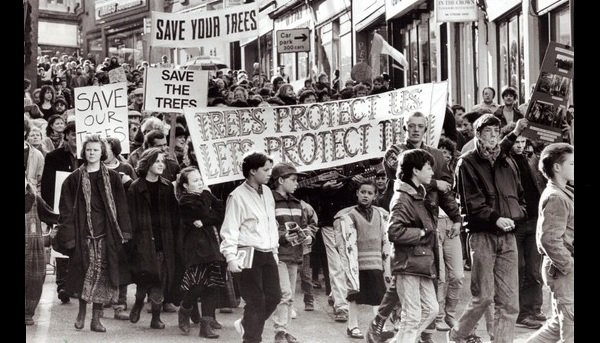 New trees will be planted to mark the 25th anniversary of a fight to save trees in Stroud which hit national headlines.

Ten fruit trees will take pride of place in Sladebank Woods on Saturday, March 14 at 2pm. They will form part of an orchard for future generations and honour protesters who held out to save trees in Stratford park from the chop in 1989.

The trees have been bought from the residual funds of Stroud Save the Trees campaign which coordinated the protest.

Around 30 campaigners whose direct actions were the salvation of a row of trees in Stratford Park regrouped for a celebration picnic to mark 20 years, in 2009 and now this event marks their contribution again.

In August 1989, protesters took to the treetops to stop them from being cut down to make way for road widening for the nearby Tesco development.

After hearing of the threat to widen the road and fell the trees, Ron Birch and his fellow protesters swung into action in the early hours of August 23, 1989.

ecurity contractors were hired by the park’s owners Stroud District Council and joined police to try to evict the protestors.

There was a dawn scuffle but as violence flared the head of Stroud police at the time, Supt Ken Mahon, called off the operation fearing for the safety of his officers and for lives of the protestors perched in the treetops.

Save the Trees then successfully lobbied the district council and forced a U-turn on the felling proposal.

Set on the south side of the Slad Valley above Summer Crescent, with a view to Stratford Park, Sladebank

Woods is home to Stroud Forest School. The five acre site was grazed by cows up until the 1960s.

The trees will be planted on a terraced area in the sunny uplands of the woods where there have been no other trees – although a good deal of dumped domestic rubbish has had to be removed from the site.

Following the planting, beehives and a pond will be added.

The ten fruit trees will be supplied by Day’s Cottage at Brookthorpe. They will be a mixture of apples, pears and plums and be local and heritage varieties.

The woods have been owned by Kesty and Martin Jakes since 2000. They met while working for the Conservation Volunteers and were involved in tree protests at Windsor and Newbury. Martin’s first visit to Stroud, on the way from London to Wales for a Friends of the Earth conference, included a stop off in Stroud to offer support to the Stratford Park protest.