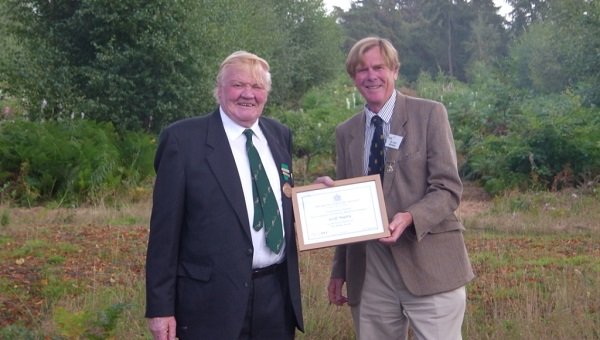 Seventeen remarkable foresters from across England and Wales received Royal Forestry Society (RFS)  Long Service Awards in 2014 after clocking up more than 690 years of experience between them.

RFS President Sir Jack Whitaker says:“Presenting Long Service Awards has been an extraordinary privilege for me. It’s so wonderful to meet these people with their huge breadth and depth of local knowledge, and admire their loyalty and tenacity. It’s also a powerful testament to our industry, that both employers and employees are devoted to this love of continuity.”

The most recent to be presented were to:

Roger John Pook from the Coode Estate in Cornwall  for his 40-year award shortly before he passed away. Roger will be much missed. As well as his work on the Coode Estate woodlands, mainly around Launceston, he was a former Secretary and Treasurer of the RFS South West a founder member of a forestry training company, Kensey Training; a member and ultimately the Chairman of the Forestry Section at the Royal Cornwall Showground and a main stay of the Cornwall Countryman’s Fair  to name but a few of his achievements.

Andrew Birch who was presented with his award for 30 years service by Foxley Estate’s owner David Davenport at a meeting of the Herefordshire Division..

The 60-year award to Walter Start, was presented posthumously to his family. Walter had also won  awards for his work both on the Froyle Estate and at Rotherfield Park in Hampshire .

Geoff Bagley, Forestry Manager on the Willey Estate in Shropshire was the third generation of his family to have worked on the estate woodlands – following in the footsteps of both his father and grandfather. He started work as an apprentice woodman at the age of 15.

Details of all recipients are  below with more details available at  www.rfs.org.uk/awards/