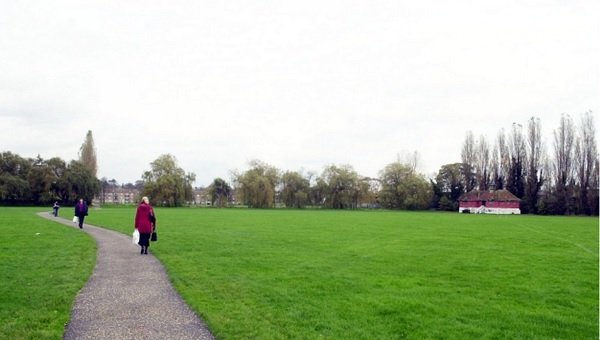 Proposals to fell seven much-loved poplar trees in Christchurch Meadows to make way for the construction of the controversial bridge over the River Thames were rubber stamped by the planning applications committee during a heated meeting on Wednesday last week.

Thunderous applause greeted neighbour Cyril Walkington’s appeal for the committee to change the plans and bring equipment in using the river, claiming it would prevent traffic chaos and the impact to the park.

He said: “The route eliminates every risk of hold-ups in traffic on George Street and the knock-on effects to surrounding routes. “This is a totally green solution with a minimum impact on wildlife and landscape.”

But boos and jeers echoed around the council chamber when committee gave the green light to fell the trees which line George Street to allow a temporary ramp to be installed to let vehicles and equipment access the construction site.

While borough strategic planning leader Cllr Tony Page admitted some equipment could be brought in by water, he rejected the objections to the application and insisted the seven 30-year-old poplars were nearing the end of their lifespan.

He said: “We have a delivery period that requires us to press ahead rapidly with the project at this time of year. Whilst the river will have and can play a role it is completely unrealistic to say everything has to come by the river.”

Plans for the 122-metre (400 foot) bridge running from Christchurch Meadows to Norman Place were approved by the committee during a heated meeting in October.

Tory committee member Cllr Isobel Ballsdon said it was sad the “significant and well-loved line of poplars” were reaching the end of their life, but added: “The case for removal and replacement has been made. I see the logic.”

Campaigners also argued the tall single mast and wires of the bridge will be dangerous for birds and wildlife, but Cllr Page rejected this and insisted that because of its size, the bridge will be a landmark everyone can appreciate.

He said: “I am a little mystified at the way in which this bridge is regarded as the most accident and bird-stricken bridge in the country.

“Birds are actually quite clever flying around bridges. Even a colour-blind bird could appreciate it.”