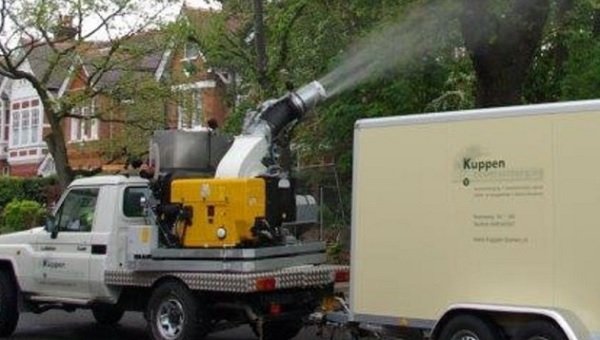 The public is being urged to report sightings of the Oak Processionary caterpillar and advised not to touch the nest—the hairs can cause itching skin and eyes, rashes and breathing problems.

Among the most affected areas is Richmond Borough, where it is thought to have been introduced accidentally when oak trees imported from continental Europe, with undetected moth eggs smaller than pin heads, were planted in 2005.”

Then it spread across London to Regent’s Park and Hampstead Heath, as well as out to parts of Surrey, Berkshire and Buckinghamshire.

It has now appered in east London’s Victoria Park—on the southern perimeter by Old Ford Road next to the Limehouse Cut, at the western end by Gore Road in South Hackney and in the north-east corner at Hackney Wick close to Cadogan Teerrace.

Nests have also been spotted at Mabley Green in Homerton, on the nearby Lea riverbank at the Olympic Park in Stratford and at the southern end of Hackney Marshes in Leyton.

“We need reports of the caterpillars or their nests,” the Commission’s south-east director Alison Field said.

“The public could play an important role in helping control the pest by reporting sightings.

“But they shouldn’t try removing the caterpillars or the nests themselves. This needs to be carefully timed to be effective, and is most safely done by pest-control experts.”

The Commisssion is working with local authorities including Tower Hamlets, which manages Victoria Park, and neighbouring Hackney and Newham to tackle the outbreak with a programme treating oak trees and removing the nests.

The caterpillar in large numbers feeds on oak leaves and can severely defoliate and leave the trees vulnerable to other pests, diseases and drought.

Its tiny hairs contain a protein which can cause skin rashes and irritate eyes and throat as well as causing breathing difficulties.

The greatest risk period is May to July, when the caterpillars are active, although nests “should not be touched” at any time, according to the Forestry Commission alert.

Anyone with skin or eye irritations after possible contact with the caterpillar is being advised to see a pharmacist, or go to their GP for more-serious reactions. Advice is being issued to GPs to identify symptoms and to advise what treatment is needed.