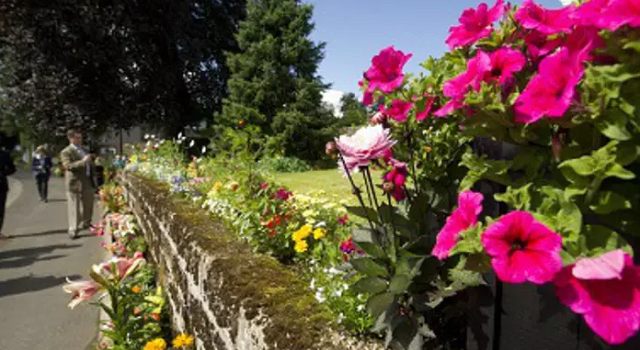 Castlecaulfield has won the Best Village award in the Translink Ulster in Bloom 2016 competition. Garlanded with greenery, and rich with the scent of flowers, the South Tyrone village has enjoyed remarkable success in the annual flower contest after scooping the award last year for the first time.

The latest victory marks a remarkable comeback after vandals attacked the village’s floral displays at the height of the flowering season. A mysterious attacker laid waste to the flower beds at the end of June, plunging the village deep in gloom. Three sites were hit including an eye-catching floral display at the entrance to the village based on a car mocked up to resemble a ladybird. However, the attack prompted an even greater effort from residents, as well as support from Mid Ulster Council and local businesses, ensuring that the village’s flowering prowess was restored to its full glory in time for the competition.

At the time, Harold Armstrong of the local horticultural society warned: “We won’t be put off by a handful of brainless morons. We will join forces to replant the beds better than before.”

Sponsored by Translink and co-ordinated by the Northern Ireland Local Government Association, Ulster in Bloom celebrates and rewards the skill, passion and dedication shown by local gardeners who make Northern Ireland a more attractive place to live in and visit. Translink Chairman, Frank Hewitt, said:

“Congratulations to all the 2016 Translink Ulster in Bloom winners and runners-up. You make Northern Ireland an attractive place to live and visit and I would like to thank all of you for your time and effort all year round.

“At Translink, we also continue to work hard to transform public transport to support the growth and prosperity of villages, towns and cities across Northern Ireland. Quality public transport touches the lives not just of our passengers but everyone in the North. It enables economic growth; supports social inclusion, regeneration and active lifestyles while also improving the environment and reducing congestion.

“We look forward to continuing to work closely with local councils, business and community groups to make a lasting positive difference to local areas and ultimately boost societal wellbeing.”