Cases of fireblight disease doubled in the last year 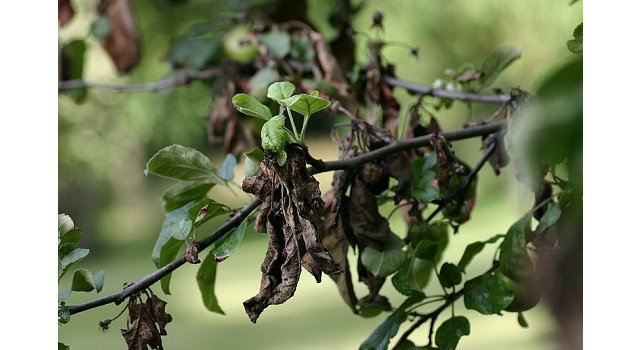 Mild weather has caused the doubling of outbreaks of an incurable disease which ravages apple and pear trees over the past 12 months.

Experts dealt with twice as many inquiries about fireblight, which kills the shoots of apples and pears and ornamental relatives, than in 2015.

Like all bacterial diseases, it has no cure, and can affect a number of trees including cherry and hawthorn varieties.

Affected trees will see the ends of branches die back with a bumpy area with jelly-like fluid. While it is unlikely, if untreated it has the potential to eventually kill trees.

John Adlam, an advisor on ornamental production, said: “Fireblight is a notifiable disease so if you have it you should be alerting your local plant health officer. The safest thing to do is to chop the branch off and burn it.”

Experts also saw a 65 per cent increase in queries about scab diseases, which were listed as the ninth biggest problem for gardeners who saw trees such as apples disfigured by unsightly dark spots on leaves and blossoms and fruits attacked.

Mr Adlam said: “apple scab can affect all production of the fruit. It affects the way the tree grows and the fruit form. It is a fungal disease which grow on leaf as a result of mild, wet weather.

“It would affect commercial growers trying to sell fruit. The whole tree becomes not very productive.”

The figures are based on the number of inquiries received by the gardening advice team at the RHS but could forecast a much wider problem.

Mr Barter said: “We have an advisory service and that’s just the tip of the iceberg so what there will be a much bigger incidence in the wild and in gardens than [the figures] we have seen.

“Our members are often pretty good gardeners so they can spot things that people might overlook so it’s a good way of checking because gardeners are private so it’s a useful insight.”

The figures also found slugs and snails were back with a vengeance in 2016, ranking at the top of the list of pests detested by gardeners.

The slimy pests generated a record number of inquiries as the UK witnessed a warm, moist year, which also saw humidity-loving honey fungus top the list of plant diseases the society received queries about.

RHS head of plant health Gerard Clover said: “Dealing with pests and diseases is an integral part of gardening and always has been.

“However, gardeners are not powerless against the threats posed by pests and diseases.

“Simple steps such as choosing more resistant varieties and taking an integrated approach to dealing with them, which could involve using a combination of controls together such as biological and cultural, can help gardeners fight back.”

Glasshouse thrips have flown into the top 10 most prevalent pests for the first time in 2016, landing in fourth place.

The small insects were primarily a problem in greenhouses until around 2008 when they began to be reported on outdoor shrubs.

The RHS said it is thought that most of the outbreaks occurred on shrubs in sheltered positions in warm urban areas, but more research is needed to find out why they have become such a problem outdoors.

Mr Adlam explained that a mild winter allows many plant pathogens and plan pests to survive when normally they would be killed by cold. “We may all see some earlier examples of diseases than we would normally or at a higher level than we might expect,” he said.

“I would expect to see more spider mites to be seen earlier in the year and possibly at a higher rate because of the level of winter deaths.

“You don’t see the effects of the damage until April or May then it’s too late and by then there’s nothing you can do about it.”