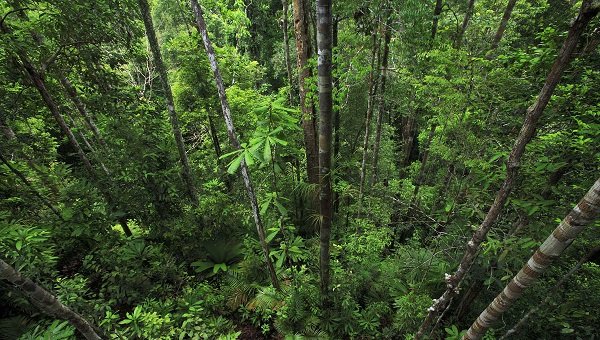 Trees that have higher levels of starch and sugars can survive droughts better than species with lower levels, say scientists.

The study, published today in Nature Communications, provides the first evidence that having increased amounts of soluble sugars and starch compounds, called non-structural carbohydrates (NSCs), means a plant is able to survive longer during a drought.

The research was part of a wider project investigating the effectiveness of conservation efforts in Borneo rainforests and whether they will leave the forest more susceptible to climate change.

‘We wanted to know if species differ in their levels of NSCs, and if so, does that mean they differ in their resilience to drought,’ says Professor Andy Hector of Oxford university, who led the project.

The Borneo rainforests, like many others in South East Asia, have suffered from high levels of deforestation, which conservationists are now attempting to rectify through a process called enrichment planting – replanting the forest with seedlings of a single species.

‘The traditional forest restoration method of enrichment planting restores seedlings but usually of only a single tree species in a given area. While the forest will be restored to some degree we wanted to know how close the restored forest will be to what has been lost, and how resilient the simplified forest ecosystem will be to global change?’ explains Hector.

‘It’s similar to the financial markets. If you invest in just one thing it could pay off but putting all your eggs in one basket could leave you vulnerable in a market crash. That’s the argument in favour of a diverse portfolio of investments that spread the risk and should provide a better long term investment,’ he says.

‘The same goes for investing in species: you could invest in a single species, or you could diversify, which would provide insurance against extreme events and give greater resilience.’

Hector and his team were interested in whether replanting the forests with a single species would leave them more susceptible to droughts, which are predicted to become increasingly common with climate change.

To test whether a plant’s NSC levels made it more or less resilient to drought, the team tested the NSC levels of ten common species found in the rainforest, and then grew them in a controlled environment and didn’t water them for months until they died.

‘Across all ten species we tested, we can see that those with experimentally reduced levels of NSCs succumbed to drought faster than those with higher levels,’ says Hector.

But the differences between the species meant the team were unsatisfied with this experiment as factors other than the NSCs could have been to blame for the plants’
resilience.

To pin point the role of the NSCs more precisely, the team manipulated NSC levels by raising some seedlings first under dark conditions and then swapping them to lighter growth conditions, while doing the opposite with another set.

‘We tested all ten species in this way, by growing seedlings using the light-swapping technique and then hitting them with a destructive drought. For every single species the plants that had depleted their NSCs succumbed to drought quicker. It means we can strongly pinpoint NSCs as the cause of drought resilience,’ says Hector.

The role of NSCs is still not truly understood, although previous studies have suggested that they may help plants survive droughts by preventing blockages of air forming in the plants xylem – a pipe which carries water through the plant to the leaves.

‘If the enrichment planting uses a species with low levels of NSCs then that area of the forest may be vulnerable to future droughts and we could see a mass wipeout if an extreme drought occurred, where we lose all of the large rainforest trees that are fundamental building blocks of the system,’ warns Hector.